1. Which of the following does not belong to input alphabet if S={a, b}* for any language?
a) a
b) b
c) e
d) none of the mentioned
View Answer

Answer: c
Explanation: The automaton may be allowed to change its state without reading the input symbol using epsilon but this does not mean that epsilon has become an input symbol. On the contrary, one assumes that the symbol epsilon does not belong to any alphabet. 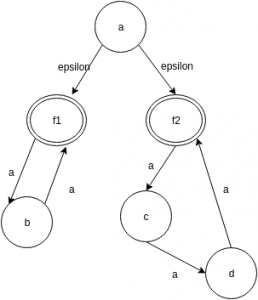 4. State true or false:
Statement: Both NFA and e-NFA recognize exactly the same languages.
a) true
b) false
View Answer

Answer: a
Explanation: e-NFA do come up with a convenient feature but nothing new.They do not extend the class of languages that can be represented.

Answer: c
Explanation: It is more convenient to simulate a machine using e-NFA else the method of Power Construction is used from the union-closure of DFA’s.
Check this: Computer Science MCQs | Automata Theory Books

6. Which of the following belongs to the epsilon closure set of a? 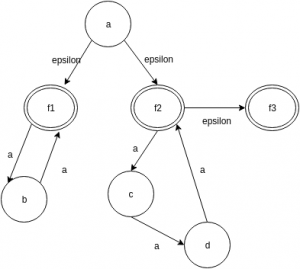 Answer: b
Explanation: The epsilon closure of the set q is the set that contains q, together with all the states which can be reached starting at q by following only epsilon transitions.

7. The number of elements present in the e-closure(f2) in the given diagram:

8. Which of the steps are non useful while eliminating the e-transitions for the given diagram?

Answer: d
Explanation: The given are the steps followed while eliminating epsilon transitions from a NFA or converting an e-NFA to just NFA.

9. Is the language preserved in all the steps while eliminating epsilon transitions from a NFA?
a) yes
b) no
View Answer

Answer: a
Explanation: Yes, the language is preserved during the dteps of construction: L(N)=L(N1)=L(N2)=L(3).
advertisement 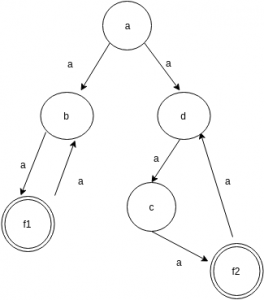