1.Given Language: L= {xϵ∑= {a, b} |x has a substring ‘aa’ in the production}. Which of the corresponding representation notate the same?
a)

View Answer
Answer: a
Explanation: The states transited has been written corresponding to the transitions as per the row and column. The row represents the transitions made and the ultimate.

Answer: c
Explanation: The given DFA notation accepts the string of even length and prefix ‘01’.

Answer: b
Explanation: Here, δ refers to transition function and results into new state or function when an transition is performed over its state.
advertisement

5. Fill the missing blank in the given Transition Table:
Language L= {xϵ∑= {0,1} |x accepts all the binary strings not divisible by 3}

Answer: b
Explanation: The tabular representation of DFA is quite readable and can be used to some ore complex problems. Here, we need to form the transition graph and fill up the given blank.
advertisement

6. Which among the following is the missing transition in the given DFA?
L= {xϵ∑= {a, b} | x starts with a and ends with b} 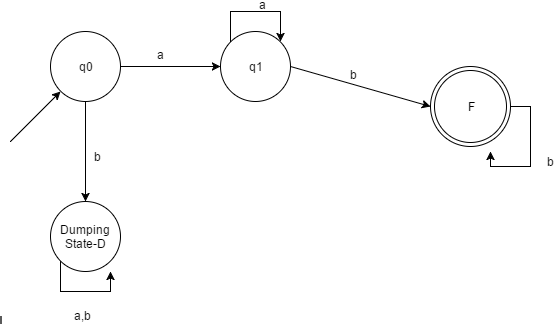 Answer: b
Explanation: For the given Language, the transition missing is δ (F, a) = q1.

7. The complement of a language will only be defined when and only when the __________ over the language is defined.
a) String
b) Word
c) Alphabet
d) Grammar
View Answer

8. Which among the following is not notated as infinite language?
a) Palindrome
b) Reverse
c) Factorial
d) L={ab}*
View Answer

9. Which among the following states would be notated as the final state/acceptance state?
L= {xϵ∑= {a, b} | length of x is 2} 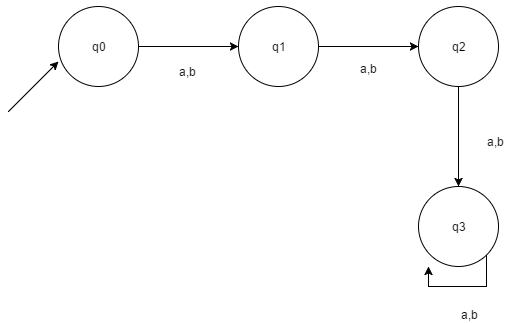 Answer: b
Explanation: According to the given language, q2 Is to become the final/acceptance state in order to satisfy.

10. Which of the following are the final states in the given DFA according to the Language given.?
L= {xϵ∑= {a, b} |length of x is at most 2}

Answer: d
Explanation: According to the given language, the length is at most 2, thus the answer is found accordingly.