Answer: a
Explanation: What we observe from the question is that, it includes e and 11 and any number of 1’s then. Therefore, its simplifies when we write the same reg. Expression as (11+111)*.

3. The minimum number of 1’s to be used in a regular expression of the given language:
R(x): The language of all strings containing exactly 2 zeroes.
a) 2
b) 3
c) 0
d) 1
View Answer

Answer: b
Explanation: It is not required to automate the question if asked theoretically.The number of zeroes fixed is 2. Therefore, we can represent the regular expression as 1*01*01*.
Subscribe Now: Automata Theory Newsletter | Important Subjects Newsletters

Answer: c
Explanation: According to the given regular expression, e is accepted by its language and it does not end with 00 or 11 or 0 or 1. Thus option a and b are eliminated. Further, the regular expression is valid for the third option.

5. Statement: If we take the union of two identical expression, we can replace them by one copy of the expression.
Which of the following is a correct option for the given statement?
a) Absorption Law
b) Idempotent Law
c) Closure Law
d) Commutative Law
View Answer

Answer: b
Explanation: Idempotent Law states that if we take the union of two like expression, we can use a copy of the expression instead i.e. L+L=L. The common arithmetic operators are not idempotent.
Check this: Automata Theory Books | Computer Science MCQs

7. Statement: A digit, when used in the CFG notation, will always be used as a terminal.
State true or false?
a) True
b) False
View Answer

Answer: a
Explanation: Lowercase letters near the beginning of an alphabet, a, b and so on are terminal symbols. We shall also assume that digits and other characters such as + or parenthesis are terminals.
advertisement

8. Choose the incorrect process to check whether the string belongs to the language of certain variable or not?
a) recursive inference
b) derivations
c) head to body method
d) All of the mentioned
View Answer

Answer: d
Explanation: There are two approaches to infer that certain string are in the language of a certain variable. The most conventional way is to use the rules from body to head, recursive inference. The second approach is expanding the starting variable using one of its productions whose head is tart symbol and derive a string consisting entirely of terminals(head to body or derivations).

Answer: c
Explanation: It completely depends on the person who develops the grammar of any language, how to make use of the tools i.e. leftmost and rightmost derivations.
advertisement

10. A->aAa|bAb|a|b|e
Which among the following is the correct option for the given production?
a) Left most derivation
b) Right most derivation
c) Recursive Inference
d) None of the mentioned
View Answer

Answer: a
Explanation: The given form represents leftmost derivations in which at each step we replace the leftmost variable by one of its production bodies. 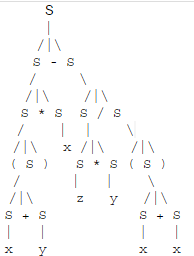