2. a→b
Restriction: Length of b must be atleast as much length of a.
Which of the following is correct for the given assertion?
a) Greibach Normal form
b) Context Sensitive Language
c) Chomsky Normal form
d) Recursively Ennumerable language
View Answer

Answer: b
Explanation: A context-sensitive grammar (CSG) is a formal grammar in which the left-hand sides and right-hand sides of any production rules may be surrounded by a context of terminal and non terminal symbols. Context-sensitive grammars are more general than context-free grammars, in the sense that there are some languages that cannot be described by context-free grammars, but can be described by CSG.

3. From the definition of context free grammars,
G=(V, T, P, S)
What is the solution of VÇT?
a) Null
b) Not Null
c) Cannot be determined, depends on the language
d) None of the mentioned
View Answer

4. If P is the production, for the given statement, state true or false.
P: V->(V∑T)* represents that the left hand side production rule has no right or left context.
a) true
b) false
View Answer

Answer: a
Explanation: Here the production P is from the definition of Context free grammar and thus, has no right or left context.

6. If the partial derivation tree contains the root as the starting variable, the form is known as:
a) Chomsky hierarchy
b) Sentential form
c) Root form
d) None of the mentioned
View Answer

Answer: b
Explanation: Example: For any grammar, productions be:
S->AB
A->aaA| ^
B->Bb| ^
The partial derivation tree can be drawn as: 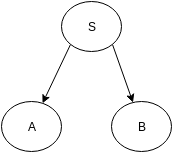 Since it has the root as S, this can be said to be in sentential form.

7. Find a regular expression for a grammar which generates a language which states :
L contains a set of strings starting wth an a and ending with a b, with something in the middle.
a) a(a*Ub*)b
b) a*(aUb)b*
c) a(a*b*)b
d) None of the mentioned
View Answer

8. Which of the following is the correct representation of grammar for the given regular expression?
a(aUb)*b
a)

d) None of the mentioned
View Answer

Answer: a
Explanation:
The basic idea of grammar formalisms is to capture the structure of string by
a) using special symbols to stand for substrings of a particular structure
b) using rules to specify how the substrings are combined to form new substrings.

10. A CFG for a program describing strings of letters with the word “main” somewhere in the string:
a)

d) None of the mentioned
View Answer