2. Choose the correct option for the given statement:
Statement: The DFA shown represents all strings which has 1 at second last position.

Answer: c
Explanation: The given figure is an NFA. The statement contradicts itself.

Answer: a
Explanation: According to subset construction, equation 1 holds true.

5. What is the relation between DFA and NFA on the basis of computational power?
a) DFA > NFA
b) NFA > DFA
c) Equal
d) Can’t be said
View Answer

Answer: c
Explanation: DFA is said to be a specific case of NFA and for every NFA that exists for a given language, an equivalent DFA also exists.
Check this: Computer Science Books | Computer Science MCQs
advertisement

Answer: c
Explanation: r(n) is the final state and accepts the string S after the string being traversed through r(i) other states where I ϵ 01,2…(n-2).

7. According to the given table, compute the number of transitions with 1 as its symbol but not 0:

Answer: d
Explanation: The transition graph is made and thus the answer can be found.
advertisement

9. Number of times the state q3 or q2 is being a part of extended 6 transition state is 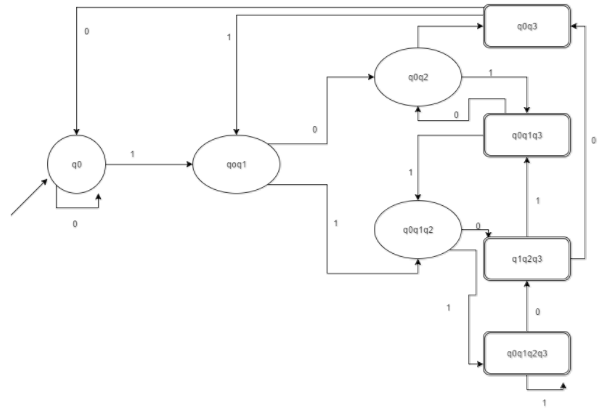 Answer: a
Explanation: According to the question, presence of q2 or q1 would count so it does and the answer according to the diagram is 6.
advertisement

Answer: c
Explanation: According to given table and extended transition state implementation, we can find the state at which it rests.