1. Which is the type of energy where the energy is harnessed by the heat accumulated on the surface of water?
a) Wind energy
b) Wave energy
c) Ocean thermal energy conversion
d) Solar energy
View Answer

Answer: c
Explanation: Absorption of heat from the sun by the seas and oceans, solar radiation causes ocean currents and moderate temperature gradients from the water surface downward especially in tropical waters.

Answer: b
Explanation: Water density decreases with an increase in temperature. Thus, there will be no thermal convection currents between the warmer, lighter water at the top and the deep cooler, heavier water. Thermal conduction heat transfer between them, across the large depths, is too low and thus mixing is retarded, so the warm water stays at the top and cool water stays at the bottom.

3. How many essentially infinite heat reservoirs are present in tropical waters?
a) 1
b) 2
c) 3
d) 4
View Answer

Answer: b
Explanation: In tropical waters, there are two essentially infinite heat reservoirs, a heat source at the surface at about 27oC and heat sink some 1 Km directly below, at about 4oC, both reservoirs are maintained by solar incidence.
Sanfoundry Certification Contest of the Month is Live. 100+ Subjects. Participate Now!
advertisement
advertisement

Answer: a
Explanation: The concept of ocean temperature energy conversion is based on the utilization of temperature difference in a heat engine to generate power. It was first recognized by Frenchman d’Arsonval in the year 1881.

6. Which of the following has the lowest efficiency?
a) Solar energy
b) Wind energy
c) Wave energy
d) OTEC
View Answer

Answer: d
Explanation: OTEC power generation gives less efficiency. However, because of the OTEC requirement for parasitic power and other losses, the achievable net conversion efficiencies of 30 to 40% associated with conventional power plants.

Answer: a
Explanation: A Claude cycle is also called as open cycle in which sea water itself plays, the multiple role of heat source, working fluid and heat sink. In this cycle warm water at 27°C is admitted into an evaporator in which the pressure is maintained at a value slightly below the saturation pressure corresponding to that of water temperature.
advertisement

Answer: a
Explanation: The working fluid chosen by Anderson OTEC cycle is propane. The operating pressures of such fluid at the boiler condenser temperatures are much higher than those of water being roughly 10 bars at the boiler, and their specific volumes are much lower, being comparable to those of steam in conventional power plants.

11. Which is the working fluid in open cycle?
a) Propane
b) Water
c) Engine oil
d) ISO-butane
View Answer

Answer: b
Explanation: In the open/Claude cycle, water is the working fluid. The warm water surface water is caused to boil by lowering the pressure, without supplying any additional heat. The low pressure steam produced then, drive’s the turbine and the exhaust steam is condensed by the deep colder water is discarded.

12. A continuous movement of water in specific direction is called as _________
a) float
b) waves
c) current
d) tides
View Answer

Answer: d
Explanation: Water currents can be found in streams, rivers and oceans throughout the world. Water current is the rate of movement in the water, and ways to describe water current include its speed and direction. There are different types of water currents which behave in different ways because they are affected by separate variables. 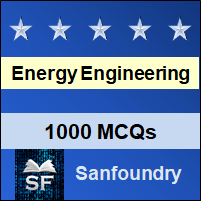