1. The impulse response of a LTI system is a unit step function, then the corresponding transfer function is
a) 1/s
b) 1/s2
c) 1
d) s
View Answer

Answer: b
Explanation: The roots of the equation can be calculated using Routh-Hurwitz criterion and hence there are 2 sign changes in the first column of the row and therefore the two roots lie on the right half of s-plane.
advertisement
advertisement

4. If the Nyquist plot of the loop transfer function G (s)H (s) of a closed-loop system encloses the (1, j0) point in the G (s)H (s) plane, the gain margin of the system is
a) Zero
b) Greater than zero
c) Less than zero
d) Infinity
View Answer

Answer: b
Explanation: Final value theorem is given for the stable system only and this is a type 1 system and for step input the final value can be calculated as 5/2.
advertisement

9. The LVDT is used in the measurement of:
a) Displacement
b) Acceleration
c) Velocity
d) Humidity
View Answer

Answer:a
Explanation: The LVDT is the linear variable differential transformer and it is used to calculate the displacement with the inductor process.
advertisement

Answer: c
Explanation: A system is relative stable not stable if the phase margin is close to zero then the stability is checked by gain margin. 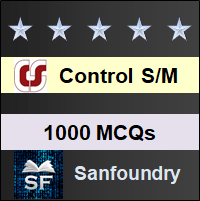