1. What is the deformation per unit length?
a) Strain
b) Stress
c) Toughness
d) Resilience
View Answer

Answer: a
Explanation: Deformation per unit length is known as strain. Stress is a load per unit area. Strain is expressed in fraction or in percent.
advertisement

Answer: a
Explanation: Ductility is calculated by percentage elongation. It is the ability of a material to undergo plastic deformation. It is opposite of brittleness.

Answer: b
Explanation: Strain is given by the change in length divided by original length. Here on calculation, strain comes out to be 1.0.

4. Ductility is the opposite concept of _________
a) Toughness
b) Plasticity
c) Brittleness
d) Resilience
View Answer

Answer: c
Explanation: Ductility is the measure of percentage elongation. Brittleness shows a material’s susceptibility to undergo brittle fracture. Hence it is the opposite of ductility.

Answer: d
Explanation: Ratio of lateral strain to linear strain is known as Poisson’s ratio. Modulus of elasticity is ratio of stress to strain. Bulk of modulus is mostly applied in liquids.
advertisement

6. Material, if show identical properties in all directions, is said to be _________
a) Isotropic
b) Elastic
c) Ideal
d) Homogeneous
View Answer

Answer: a
Explanation: Directional properties are measured in terms of isotropy. If it shows properties identical in all directions, it is known as isotropic. Anisotropic is opposite of isotropic.

Answer: c
Explanation: Decreasing order of elasticity is steel > copper > rubber > glass. Elasticity is inversely proportional to strain developed within the material. That’s why steel is the most elastic of four.

9. The maximum stress up to which stress is proportional to strain is known as ________
a) Tensile stress
b) Compressive stress
c) Modulus of elasticity
d) Proportional limit
View Answer

Answer: d
Explanation: The maximum stress up to which stress is proportional to strain is known as proportional limit. Modulus of elasticity is a ratio of stress to strain. Hooke’s law holds good in this limit.
advertisement

Answer: b
Explanation: Strain hardening is an effect of dislocation multiplication. It causes a back stress development in material. So extra load is needed to apply.

12. Necking causes drop in load after an ultimate tensile point.
a) True
b) False
View Answer

Answer: a
Explanation: Ductile metals show the drop in load after an ultimate tensile point. It is because of necking. It results in decrease in local cross section.

To practice all areas of Mechanical Behaviour Problems, here is complete set of 1000+ Multiple Choice Questions and Answers. 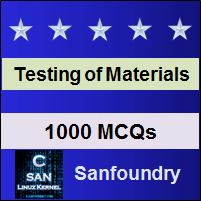