1. Which of the following is the best braking method?
a) Friction
b) Electromechanical action
c) Eddy-currents
d) Electric braking
View Answer

Answer: d
Explanation: Braking methods based on friction, electromechanical action, eddy-currents, etc. are independent of the motor but sometimes electric braking is better justified owing to its greater economy and absence of brake wear.

2. DC motor is still widely used in tractions due to its excellent braking properties.
a) True
b) False
View Answer

Answer: b
Explanation: Dc motor is used in tractions because of its excellent braking characteristics and ability of smooth transition from the motor to the generator mode and vice versa. Also, characteristics suit perfectly for traction application.

3. Which of the following is not the method of electrical braking?
a) Plugging or counter-current
b) Dynamic or rheostatic
c) Regenerative
d) Eddy current
View Answer

Answer: d
Explanation: Eddy current is the electrical effect or response of the system, which is reflected mechanically at brakes to reduce the speed of the motor. Thus, eddy current is not an electrical brake, it is mechanical one.
Sanfoundry Certification Contest of the Month is Live. 100+ Subjects. Participate Now!
advertisement
advertisement

Answer: b
Explanation: Plugging is method where connections are reversed at a given instant. Because of the problem of interrupting highly inductive field current and the time needed for the field current to build up in opposite direction, it is a common practice to reverse armature connections.

Answer: a
Explanation: Braking torque is equal to braking power divided by speed of the motor.
T= [(nka )2/Rb]/n. As, Braking power is equal to Ea2/Rb/n. By solving for the braking torque from the above equation, we get n (ka2/Rb).
Check this: DC Machines Books | Electrical Engineering MCQs

Answer: b
Explanation: Braking torque of the DC machine is given by n (ka2/Rb). Here, braking torque is directly proportional to the speed of the motor, so as the speed decreases the efficiency of electrical brakes which is dependent on braking torque decreases.

8. Plugging is used in ____________
a) Small motors only
b) Small and medium powered
c) Only in large heavy machines
d) Everywhere
View Answer

Answer: d
Explanation: Reversal of the connections of armature is the method called plugging. In dynamic braking we remove the armature circuit and connect it to different resistor, with field circuit still connected to the external supply.
advertisement

Answer: d
Explanation: In dynamic braking, when brakes are applied the armature is disconnected from machine circuit and connected to the braking resistor. Now, at this point motor is driven by kinetic energy gained earlier, dissipating power in braking resistor.

11. In dynamic braking, when braking is applied system acts as ___________
a) Freely running machine
b) Motor with slow speed
c) Generator
d) Motor with same speed in opposite direction
View Answer

Answer: c
Explanation: The armature is disconnected from the supply and then a braking resistor Rb is immediately connected across it. The motor acts as a generator, driven by the inertia and stored kinetic energy dissipating power in Rb. This is a simple method of bringing a motor nearly to a standstill. 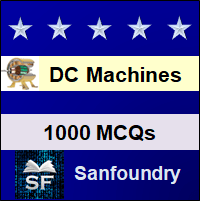