This set of DC Machines Questions and Answers for Campus interviews focuses on “DC Motor Control Through Choppers”.

1. Which of the following method is adopted for controlling a DC motor?
a) Resistance control
b) Motor-generator set
c) Inverter Rectifier
d) DC chopper
View Answer

Answer: d
Explanation: All methods listed above are the methods which can be used to control DC motor, but resistive method makes lots of wastage of energy, while motor-generator set and inverter rectifier set are bulky and costly.
advertisement

2. Which of the following method is employed when regenerative braking is necessary?
a) DC chopper
b) Variable resistor
c) Inverter rectifier
d) Motor-generator
View Answer

Answer: a
Explanation: A chopper is essentially an electronic switch that turns on the fixed-voltage DC source for short time intervals and applies source potential to motor terminals in series of pulses. This process controls the average voltage applied to the motor.

3. Which of the following statement is not true regarding to DC chopper?
a) Cheap
b) Fast response
c) Regeneration
d) AC to DC control
View Answer

Answer: d
Explanation: The chopper provides stepless and efficient control of DC voltage and it is less expensive. It is having another advantage of faster response and regeneration. The chopper is relatively new technology and equivalent to DC-DC transformer.

Answer: c
Explanation: A chopper is essentially a thyristor switch in series with the load. A shunting diode is provided across the load because free-wheeling the load current when thyristor is off. The thyristor can be shown enclosed by a dotted square can be turned-off over a time period and the cycle is repeated.

Answer: a
Explanation: Here the average value of the chopper output voltage waveform is given by Va=V tON/(tON+tOFF) = V (tON/T) =αV. So, by varying duty cycle α one can vary the average voltage at output.
advertisement

Answer: c
Explanation: The average voltage of the chopper output depends on α, thus, α can be varied by either changing the complete time period or by changing an on time or off time. These two methods are named as constant and variable frequency system.

Answer: a
Explanation: Two auxiliary thyristors are connected in the chopper circuit along with one diode, one inductor, one capacitor in series with the voltage supply which is then connected in parallel with diode and DC motor armature.

Answer: d
Explanation: Two auxiliary thyristors are connected in the chopper circuit along with two diodes, one inductor, one capacitor in series with the voltage supply which is then connected in parallel with diode and DC motor armature.
advertisement

To practice all areas of DC Machines for Campus Interviews, here is complete set of 1000+ Multiple Choice Questions and Answers. 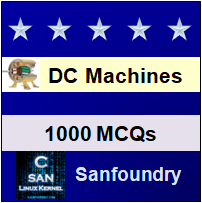