This set of Wireless & Mobile Communications Questions and Answers for Entrance exams focuses on “Development of Wireless Networks”.

3. Which of the following network protocol is used by US cellular carriers to automatically accommodate subscribers who roam into their coverage regions?
a) IS-36
b) IS-121
c) IS-41
d) IS-14
View Answer

4. IS-41 does not rely on autonomous registration.
a) True
b) False
View Answer

5. MSC distinguishes home users from roaming users based on MIN.
a) True
b) False
View Answer

Answer: d
Explanation: The visited system creates a VLR record for each new roamer and notifies the home system via IS-41 so it can update its own HLR. IS-41 allows the MSCs of neighboring systems to automatically handle the registration and location validation of roamers so that users no longer need to manually register as they travel.

7. Which of the following is not an example of second generation wireless networks?
a) GSM
b) CT2
c) AMPS
d) PACS
View Answer

Answer: a
Explanation: In second generation wireless networks, the handoff process is mobile controlled and is known as mobile assisted handoff (MAHO). The mobile units in these networks perform several other functions not performed by first generation subscriber units.

9. __________ is an example of second generation cordless telephone standard which allows each cordless phone to communicate with any number of base stations.
a) PACS
b) CT2
c) GSM
d) DECT
View Answer

Answer: d
Explanation: DECT is an example of second generation cordless telephone standard which allows each cordless phone to communicate with any number of base stations. In DECT, the base stations have greater control in terms of switching, signalling, and controlling handoffs.
advertisement

Answer: a
Explanation: In PACS/ WACS, the BSC is called a radio port control unit. This architectural change has allowed the data interface between the base station controller and the MSC to be standardized.

To practice all areas of Wireless & Mobile Communications for Entrance exams, here is complete set of 1000+ Multiple Choice Questions and Answers. 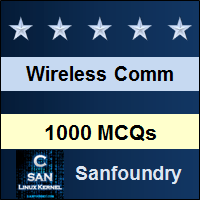