Answer: b
Explanation: R Commander is used to import data in R language. To start the R commander GUI, the user should type in the command Rcmdr into the console. There are 3 different types in which data can be imported in R language.
advertisement

Answer: d
Explanation: In R language when the vectors have different lengths, the multiplication begins with the smaller vector and continues till all the elements in the larger vector have been multiplied.

3. How missing values and impossible values are represented in R language?
a) NA
b) NAN
c) NA & NAN
d) Not Exist
View Answer

5. Which function in R language is used to find out whether the means of 2 groups are equal to each other or not?
a) f.tests ()
b) l.tests ()
c) t.tests ()
d) not exist
View Answer

Answer: c
Explanation: t.tests () function in R language is used to find out whether the means of 2 groups are equal to each other. It is not used most commonly in R. It is used in some specific conditions.
advertisement

6. __________ is the best way for communicating the results of data analysis using the R language.
a) Single document
b) Files
c) Structures
d) Loadings
View Answer

Answers: a
Explanation: The best possible way to do this is to combine the data, code and analysis results for a single document by knitr for reproducible research. This helps others to verify the findings, then engage in discussions.

8. __________ is the easiest method for reshaping the data before analysis.
a) Transpose()
b) Structure()
c) Package
d) Function
View Answer

Answer: a
Explanation: Transpose t () is the easiest method for reshaping the data before analysis. The transpose (reversing rows and columns) is always the simplest method of reshaping a dataset. Use the t() function to transpose a matrix or a data frame.

Answer: b
Explanation: With a () function is used to apply an expression for a given dataset. R language has a large number of in-built functions and the user can create their own functions. In R, a function is an object to the R interpreter is able to pass control to the function.
advertisement

Answer: b
Explanation: dplyr is a powerful R-package to transform and summarize tabular data with rows and columns. dplyr package is used to speed up data frame management code. dplyr is a package for data manipulation, written and maintained regularly by Hadley Wickham.

To practice all areas of R Programming Language, Here is complete set of 1000+ Multiple Choice Questions and Answers. 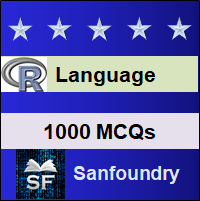