Answer: a
Explanation: Shear forces will govern the design of beam if beams are short and are heavily loaded (heavy concentrated load) or deeply coped.

3. Longitudinal shear occurs due to
a) light load on beam
b) bending of beam
c) twisting of beam
d) does not occur
View Answer

Answer: b
Explanation: Longitudinal or horizontal shear occurs due to bending of beam. The fibers above shorten in length and those below neutral axis elongate under sagging bending moments. Therefore, the fibers tend to slip over each other and the effect is maximum at the neutral axis. The tendency to slip is resisted by shear strength of the material.

6. In which of the following cases shear does not govern design of beam?
a) when web thickness is large in plate girders
b) when depth of beam section is small and loaded uniformly
c) when large concentrated loads are placed near support
d) when two members are rigidly connected together with their webs lying in same plane
View Answer

Answer: a
Explanation: Shear determines design of beam when depth of beam section is small and loaded uniformly, when large concentrated loads are placed near beam supports, when two members are rigidly connected together with their webs lying in same plane, when web thickness is small in plate girders.

Answer: c
Explanation: For an I-section, flanges resist very small portion of shear and a significant portion is resisted by web. The maximum and average shear for I-section are almost same.
advertisement

Answer: d
Explanation: for practical purposes, average shear stress is used and is given by τav = V/Av = /dtw, where d = depth of web, tw = thickness of web, Av is shear area.

Answer: b
Explanation: Nominal shear strength based on Von-Mises yield criterion is given by Vn = Avfyv/√3, where fyv is yield strength of web, Vn is nominal shear resistance.

To practice all areas of Design of Steel Structures, here is complete set of 1000+ Multiple Choice Questions and Answers. 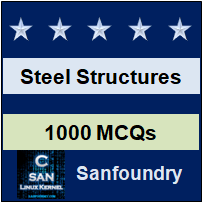