Answer: b
Explanation: Sequencing batch reactors (SBR) or sequential batch reactors are a type of activated sludge process for the treatment of wastewater. SBR reactors treat wastewater such as sewage or output from anaerobic digesters or mechanical biological treatment facilities in batches.
advertisement

2. The one tank is aerating and filling while the other one is decant.
a) True
b) False
View Answer

Answer: a
Explanation: The tanks have a “flow through” system, with raw wastewater (influent) coming in at one end and treated water (effluent) flowing out of the other. One tank is in settle/decant mode the other is aerating and filling in multiple tank systems.

3. Bio-selectors direct the flow.
a) True
b) False
View Answer

Answer: a
Explanation: In some systems, tanks contain a section known as the bio-selector, which consists of a series of walls or baffles which direct the flow either from side to side of the tank or under and over consecutive baffles.

Answer: d
Explanation: This helps to mix the incoming Influent and the returned activated sludge (RAS), beginning the biological digestion process before the liquor enters the main part of the tank.

5. How is mixing done in SBR?
a) Manual
b) Mechanical
c) Air stripping
d) Agitation by air
View Answer

Answer: b
Explanation: The inlet valve opens and the tank is being filled in, while mixing is provided by mechanical means (no air). This stage is also called the anoxic stage.
Advertisement: Join Sanfoundry@Linkedin

6. In which stage of the SBR is aeration performed?
a) First
b) Second
c) Third
d) fourth
View Answer

Answer: b
Explanation: The fixed or floating mechanical pumps are used or air is transferred into fine bubble diffusers fixed to the floor of the tank during the second stage aeration of the mixed liquor.

7. In which stage are the aeration and mixing avoided?
a) First
b) Second
c) Third
d) Fourth
View Answer

Answer: c
Explanation: No aeration or mixing is provided in the third stage and the settling of suspended solids starts. During the fourth stage, the outlet valve opens and the “clean” supernatant liquor exits the tank.

8. The multiplication of _________ is encouraged by the addition of oxygen.
a) Bacteria
b) Aerobic bacteria
c) Anaerobic bacteria
d) Fungi
View Answer

Answer: b
Explanation: Aeration times vary according to the plant size and the composition/quantity of the incoming liquor, but are typically 60 to 90 minutes. The multiplication of aerobic bacteria is encouraged by the addition of oxygen.

Answer: c
Explanation: To remove phosphorus compounds from the liquor, aluminium sulphate (alum) is often added during this period. It reacts to form non-soluble compounds, which settle into the sludge in the next stage.
advertisement

10. The _________ is usually the same length in time as the aeration.
a) Screening stage
b) Mixing stage
c) Clarification stage
d) Settling stage
View Answer

Answer: d
Explanation: The settling stage is usually the same length in time as the aeration and during this stage, the sludge formed by the bacteria is allowed to settle to the bottom of the tank.

11. Which part of the tank is suitable for anaerobic bacteria to flourish?
a) Top
b) Bottom
c) Sides
d) Middle zone
View Answer

Answer: b
Explanation: The aerobic bacterium multiplies until the dissolved oxygen is all used up. The bottom conditions are more suited for the anaerobic bacteria to flourish.

Answer: d
Explanation: An anaerobic process uses anoxic methods to remove ammonia, such as the removal of ammonia via Anammox or the study of slow-growing micro-organisms.

Answer: b
Explanation: BOD can be used as a gauge of the effectiveness of wastewater treatment plants. It is listed as a conventional pollutant in the U.S. Clean Water Act. The two major types of BOD are soluble BOD and insoluble BOD.
advertisement

14. BOD is a physical procedure for determining DO needed for aerobic biological organisms.
a) True
b) False
View Answer

Answer: b
Explanation: BOD is a chemical procedure for determining the amount of dissolved oxygen needed by aerobic biological organisms in a body of water to break down organic material.

To practice all written questions on Waste Water Engineering, here is complete set of 1000+ Multiple Choice Questions and Answers. 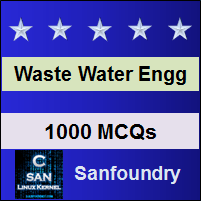