1. Name the polymer formed by the polymerization of ω-amino caproic acid using water as a catalyst?
a) nylon 6
b) nylon 6,6
c) nomex
d) abs
View Answer

Answer: a
Explanation: Nylon 6 is formed by the polymerization of ω-amino caproic acid in the presence of water ( used as a catalyst) and small amount of acetic acid for regulating the chain length.
nNH2−(CH2)5−COOH → [−NH−(CH2)5−CO−]n .
advertisement

Answer: c
Explanation: The reaction between hexamethylene diamine and sebacic acid gives the polyamide Nylon 610 via formation of an appropriate salt. The reaction is given by-
nNH2−(CH2)6−NH2 + HOOC−(CH2)8−COOH → [−NH−(CH2)6−NH−CO−(CH2)8−CO−]n.

3. Monomer A is reacted with a monomer B in boiling methanol to form a salt. The salt dissolved in water with a little amount of acetic acid is then processed in autoclave at different temperatures and pressure. Monomer A is a bifunctional monomer having amine groups. What is the name of monomer B?
a) adipic acid
b) ω-amino caproic acid
c) undecanoic acid
d) dodecyl lactam
View Answer

Answer: a
Explanation: Monomer A is adipic acid and monomer B is hexamethyelene diamine, which reacts in the given conditions and then processed into an autoclave, where temperature is raised to 220 ᵒC and later pressure is allowed to develop at 250 psi.

4. Which of the following mechanism takes place for the formation of high molecular weight Nylon 6 from caprolactum?
a) anionic mechanism
b) cationic mechanism
c) radical mechanism
d) none of the mentioned
View Answer

Answer: a
Explanation: The polymerization of caprolactum y anionic mechanism follows in the presence of a strong base to for high molecular weight nylon 6.

Answer: b
Explanation: Aromatic polyamides are commonly known as aramids. Aramid fibres are a recent development to be practically used.
Advertisement: Join Sanfoundry@Linkedin

6. Which of the following can help in achieving the mechanical properties of nylons?
a) plasticizers
b) nucleating agents
c) mould agents
d) impact modifiers
View Answer

Answer: b
Explanation: The mechanical properties of nylons are largely dependent on the crystallinity of polymers. Thus, such kind of properties can be developed by increasing the degree of crystallinity and spherulite size with the help of nucleating agents.

7. Polyamides have a limited use in the areas where long exposure to temperatures above 70-90 ᵒC is required, due to their tendency of surface oxidation in air. Which heat stabilizer can permit their use even in higher temperatures?
a) sodium salts
b) copper salts
c) potassium salts
d) none of the mentioned
View Answer

Answer: b
Explanation: The addition of nearly 1% of copper salts acts as heat stabilizer and permits the use of polyamides at higher temperatures.

8. Where is the use of nylon films unsuitable, considering the properties required for applications?
a) packaging of food stuffs
b) packaging of drugs
c) for pharmaceuticals
d) none of the mentioned
View Answer

Answer: d
Explanation: Nylon films have an impressing feature of low odour transmission which makes it suitable for use in the packaging of food stuffs, drugs and pharmaceuticals.

Answer: a
Explanation: Nomex is an aramide formed by the solution or interfacial polymerization of isophthaloyl chloride and m-phenylene diamine. It has a melting point of 365 ᵒC.
advertisement

Answer: a
Explanation: The moulded objects prepared from nylons have a tensile strength nearly about 12000 psi, which is far higher than the objects from other polymers.

12. Which polyamide can be used as substitute of steel in belted radial tires?
a) kevlar
b) nomex
c) nylon 12
d) nylon 11
View Answer

Answer: a
Explanation: Kevlar provides a fibre material, than has strength equal to steel at one-fifth of its weight. So it is used as a substitute for the steel in belted radial tires and also in manufacturing of protective clothing.

13. Which of the following nylons has a lower specific gravity than the others?
a) nylon 6
b) nylon 66
c) both have nearly same
d) none of the mentioned
View Answer

Answer: c
Explanation: Nylon 6 and Nylon 66 have nearly same specific gravities which are close to 1.13 and 1.14, respectively.
advertisement 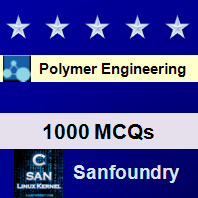