This set of Polymer Engineering Questions and Answers for Freshers focuses on “Techniques of Polymerization-2”.

Answer: b
Explanation: The size of the monomer droplets is generally in the range of 0.1-5 mm.
advertisement

2. Which of the following feature of water as a solvent helps in purity of polymer?
a) low cost
b) non-toxic nature
c) convenient boiling temperature
d) zero chain transfer constant
View Answer

Answer: d
Explanation: The special feature of water as a solvent is that it provides us with a medium characterized by zero chain transfer constant.

3. Which of the following compounds can minimize the fluctuations in surface tension of emulsion in emulsion polymerization?
a) soaps
b) cetyl alcohol
c) dextrin
d) peroxides
View Answer

Answer: b
Explanation: Cetyl alcohol plays the role of a surface tension regulator and minimizes the fluctuations in the emulsion as the polymerization progresses.
Sanfoundry Certification Contest of the Month is Live. 100+ Subjects. Participate Now!
advertisement
advertisement

4. Which of the following compounds is used to control the polymer chain length in emulsion polymerization?
a) cetyl alcohol
b) buffer solutions
c) dodecyl mercaptan
d) gelatin
View Answer

Answer: c
Explanation: Dodecyl mercaptan is used as a chain length regulator or chain transfer agent of high transfer constant to control the chain length of the polymer.

5. Which of the following cannot be a protective colloid for emulsion polymerization?
a) Carboxymethyl cellulose
b) Cetyl alcohol
c) gelatin
d) poly vinyl alcohol
View Answer

Answer: b
Explanation: The water soluble polymers like carboxy-methyl cellulose, PVA and gelatin stabilizes the emulsion and prevents emulsion break down with progress of polymerization, so these can be called as a protective colloid for emulsion.
Check this: Chemical Engineering Books | Polymer Technology Books
advertisement

Answer: c
Explanation: The polymerization rate per cubic centimeters of aqueous phase is given by- Rp= kp (N/2)[M] Thus the rate Rp is independent of rate of radical generation, Ri.

Answer: d
Explanation: The emulsion polymerization technique allows the increase in both the rate and degree of polymerization simultaneously by increasing the number of polymer particles, N at a fixed rate of initiation.
advertisement

10. What is the average equilibrium radical concentration in the aqueous medium in emulsion polymerization?
a) 108 radical/cm3
b) 1013 radical/cm3
c) 105 radical/cm3
d) 1015 radical/cm3
View Answer

Answer: a
Explanation: The equilibrium radical concentration in the aqueous medium, [Raq∙] is measured to be about 108 radical/cm3. 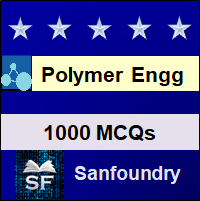