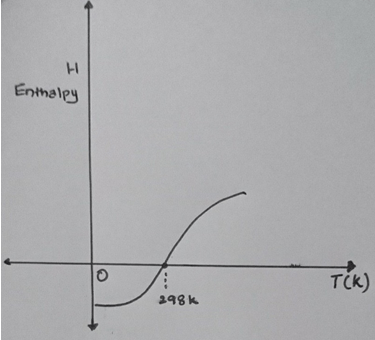 Answer: d
Explanation: The slope of the graph gives the value of specific heat Cp. As dH/dt for pure metal gives the CP value. CP is actually the specific heat of the gas at constant pressure and interestingly solids and fluids are having only a single value for specific heat.
advertisement

3. At all temperatures the liquid has a higher enthalpy than solid.
a) True
b) False
View Answer

Answer: a
Explanation: Liquid absorbs more heat and they covet their gained heat into higher vibrational and translational molecular motion, hence at temperatures the liquid has a higher enthalpy than solid.
Note: Join free Sanfoundry classes at Telegram or Youtube
advertisement
advertisement

5. Which of the following is a spontaneous exothermic process?
a) Rusting
b) Ice melting
c) Removal of sugar from the coffee
d) Dissolution of sand in water
View Answer

Answer: a
Explanation: Rusting is spontaneous exothermal process .Melting of ice is a spontaneous endothermic process and the last two are non-spontaneous in nature.
Check this: Phase Transformation Books | Metallurgical Engineering Books
advertisement

Answer: a
Explanation: Richards rule states that the entropy of fusion is a constant for most metals. Fermat’s rule helped in finding the greatest and smallest ordinates in curved lines and Charles law states that pressure remaining constant, the volume of a given mass of gas increases or decreases by 1/273 part of its volume at 0 degree Celsius for each degree Celsius rise or fall of its temperature.
advertisement

Answer: a
Explanation: The enthalpy of a phase which is stable at higher temperature is higher because ΔH value is greater than 0 that is H1-H2>0(H1 and H2 represent gamma and alpha phase respectively).

9. What happens to the internal energy of a system with constant volume and constant entropy during a spontaneous process?
a) Increases first then decreases
b) Decreases
c) Remains same
d) Increases
View Answer

Answer: d
Explanation: The reason for this lies in a more closely packed structure where there is a lesser degree of vibrational freedom, hence it makes α-TI with HCP structure stable at low temperature.

To practice all areas of Phase Transformation for online Quizzes, here is complete set of 1000+ Multiple Choice Questions and Answers.