Answer: d
Explanation: In general the transformed volume will not fit perfectly into the space originally occupied by the matrix and this gives rise to a misfit strain energy ΔGs per unit volume of β. For both coherent and incoherent inclusions, ΔGs is proportional to the volume of the inclusion.

2. If values of the misfit energy term and reduction of volume free energy are the same then the total free energy during a homogeneous transformation is given as______
a) 0
b) VΔGs + VΔGv
c) Aγ
d) Cannot be determined
View Answer

3. What will happen to critical radius if the value of ΔGs, ΔGv becomes same?
a) Tends to infinity
b) Tends to 0
c) Unity
d) No relation
View Answer

5. Consider the precipitation of B-rich β from a supersaturated A-rich α solid solution. Which among the following will lead to the creation of activation energy barrier?
a) Creation of α/β interface
b) Diffusion of α matrix
c) Diffusion of β matrix
d) Nothing can be predicted
View Answer

Answer: a
Explanation: Here the first step in the for the nucleation of β is that the B-atoms within the α matrix must first diffuse together and they try to form a small volume with the β composition, and then, when its necessary, the atoms must reorder or rearrange themselves into the crystal structure β . Then the α/β interface must be created during the process with the liquid->solid transformation, this leads to an activation energy barrier.

6. Calculate the concentration of critical sized nuclei if the critical free energy tends to 0? (Assume the number of atoms per unit volume in the phase is given as Cx)
a) Cx
b) Cx*exp (1)
c) Cx*exp (-1)
d) Nothing can be predicted
View Answer

Answer: a
Explanation: Since the value of critical free energy is 0, the concentration of critical sized nuclei formed is Cx. This can be understood easily when we substitute the respective values in the related equation that is C* = Cx*exp (-ΔG*/kT), since the value of ΔG*->0 we get C*= Cx.

7. If we ignore the variation of γ with interface orientation and assume the nucleus is spherical with a radius of curvature r, determine the value of γ if the value of (ΔGs-ΔGv) tends to zero? (ΔG represents the total energy)
a) ΔG/4πr2
b) ΔG/4πr3
c) ΔG/((4/3)*πr2)
d) ΔG/4πr
View Answer

Answer: a
Explanation: If we consider the value of ΔG as a function of r we finally end up in the equation, ΔG = (4/3)*πr3*(ΔGs-ΔGv) + 4πr2γ, so when this value (ΔGs- ΔGv) tends to zero we can directly equate the interfacial energy term with the total energy.

8. In which among the following system does the equilibrium phase nucleate homogeneously?
a) Cu-Co
b) S-P
c) Cu-Ag
d) Au-Cu
View Answer

Answer: a
Explanation: In the Cu-Co system Cu alloys containing 1-3% Co can be solution treated and quenched to a temperature where Co precipitates. Both Cu and Co are fee with only a 2% difference in lattice parameter. Therefore, very little coherency strain is associated with the formation of coherent Co particles.

Answer: a
Explanation: The value of homogeneous nucleation rate is given as N (hom) = f*C. f depends on how frequently a critical nucleus can receive an atom from the ‘α’ matrix. This will depend on the surface area of the nucleus and the rate at which diffusion can occur.

10. If each nucleus can be made supercritical at a rate of f per second the homogeneous nucleation rate is given as f*C (Assume C to be the concentration of critical-sized nuclei). The value of f depends on ______
a) Vibrational frequency of atoms
b) Radius of atoms
c) Texture of the phase
d) Nothing can be predicted
View Answer

Answer: a
Explanation: If the activation energy for atomic migration is ΔGm per atom, f can be written as w exp (-ΔGm/kT) where w is a factor that includes the vibration frequency of the atoms and the area of the critical nucleus.

12. Equilibrium phase is probably formed homogeneously at a few tens of degrees undercooling is at the precipitation of Ni3Al in many Ni-rich alloys.
a) False
b) True
View Answer

Answer: b
Explanation: This is an example where the equilibrium phase nucleate. Depending on the system the misfit varies up to a maximum of 2%, and interfacial energy is probably less than 30 mJmˉ2. Most other examples of homogeneous nucleation, however, are limited to metastable phases, usually GP zones

13. Which among the following curve represents the surface energy term? 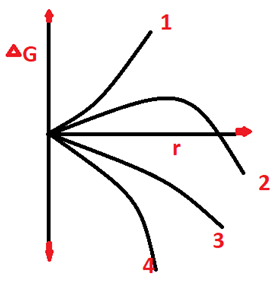 14. Driving force for precipitation (ΔGv) is the main factor in controlling_________
a) The energy barrier or critical free energy
b) Size of the nuclei
c) Surface energy
d) Rate of fusion
View Answer

Answer: a
Explanation: The main factor that controls ΔG* is the driving force for precipitation. And this ΔG* is strongly dependent on the temperature. This critical free energy is obtained by differentiating the total energy equation and equating it to 0.

15. In most systems the α and β phases have such different crystal structures that it is impossible to form coherent low-energy interfaces and homogeneous nucleation of the equilibrium β phase is then impossible.
a) True
b) False
View Answer

Answer: a
Explanation: Even though this scenario exists, it is often possible to form a coherent nucleus of some other, metastable phase (β’) which is not present in the equilibrium phase diagram. The most common example of this is the formation of GP zones.