1. Which among the following condition about a simple binary system is not a part of Hume- Rothery rule?
a) Same crystal structure
b) Size difference is less than 15
c) Electronegativity’s have similar values
d) Composition should be almost similar
View Answer

2. The Gibbs free energy variation for a binary system of constituents A and B is shown in the figure below. The point of intersection corresponds to____________________ 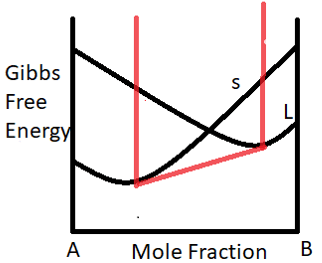 3. Enthalpy of mixing is negative, for such systems melting will be more difficult in the alloys and a maximum melting point mixture may appear.
a) True
b) False
View Answer

Answer: a
Explanation: In these systems melting will be more difficult in the alloys and a maximum melting point mixture may appear. This type of alloy also has a tendency to order at low temperatures. If the attraction between unlike atoms is very strong the ordered phase may extend as far as the liquid.
Subscribe Now: Phase Transformation Newsletter | Important Subjects Newsletters

Answer: a
Explanation: The effect of a positive enthalpy of mixing in the solid is already apparent at higher temperatures where it gives rise to a minimum melting point mixture so hence the alloys melt at temperature below the melting point.

Answer: a
Explanation: The Relative free energy of adjacent phases is used to determine the composition with minimum energy, actually this is an interesting result of common tangent construction.
Check this: Metallurgical Engineering MCQs | Phase Transformation Books
advertisement

7. The equations for free energy and chemical potential can be used to derive the effect of temperature on the limits of solid solubility in a terminal solid solution.
a) True
b) False
View Answer

9. What happens to the configurational entropy when atoms are moved from their respective sites?
a) Remains constant
b) Decreases
c) Increases
d) Become zero
View Answer

10. What causes the increase in thermal entropy due to the vacancies present in the site?
a) Collision of the adjacent atoms
b) Extra freedom of vibration
c) Due to restriction in motion
d) Due to close packing of remaining atoms
View Answer

Answer: b
Explanation: Energies of electrons in atoms depend upon temperature of the host material. More temperature means high amplitude atomic vibrations. More electrons will be in excited/ionized states at a higher temperature. One can notice a variation in the pattern of vibration next to the vacancies and this happens because of the extra free space.

11. In a cooling curve, the invariant reaction is represented by ______
a) Thermal arrest
b) Vertical arrest
c) Horizontal arrest
d) Slope
View Answer

Answer: c
Explanation: Cooling curve is a kind of line graph that depict the phase change in matter. When you fit the thermocouple in a work piece or test probe, finally you can end up obtaining a cooling curve. Horizontal arrest represents the invariant reaction in a cooling curve.