1. The two strands of cccDNA can be easily separated without any breakage of bonds.
a) True
b) False
View Answer

Answer: b
Explanation: There are no interruptions in either of the polynucleotide strands. The two strands of cccDNA cannot be separated from each other without the breaking of a covalent bond.
advertisement

2. Passing of one strand through the other in order to get separated is known as _______
a) Twist
b) Linking number
c) Writhing number
d) Toroid
View Answer

Answer: b
Explanation: The two circular strands can be separated without permanently breaking any bonds in the sugar – phosphate backbone by passing one strand through the other strand repeatedly. The number of times one strand would have to be passed through the other strand in order for the two strands to be entirely separate from each other is called the linking number.

Answer: c
Explanation: The linking number is always an integer which is an invariant topological property of cccDNA. It does not depend on the shape of the DNA molecule.

Answer: a
Explanation: Linking number is the sum of two geometric components twist and writhe. Twist is simply the number of helical turns of one strand about the other. cccDNA is usually torsionally stressed such that the long axis of the double helix crosses over itself called writhe.

6. Plectonomic writhe is __________
a) Cylindrical axis winding
b) Long axis twisted around itself
c) Helical turns of one strand about the other
d) Number of encounters of the two strands of a helix
View Answer

Answer: b
Explanation: Writhe can take two forms. One form is the interwound or plectonomic writhe, in which the long axis is twisted around itself. The other forms of writhe are toroid or spiral.

Answer: b
Explanation: Interwound writhe and spiral are topologically equivalent to each other. They have readily interconvertible geometric properties of cccDNA.

8. Twist and writhe are interconvertible.
a) True
b) False
View Answer

Answer: a
Explanation: Twist and writhe are interconvertible. A molecule of cccDNA can readily undergo distortions that convert some of its twist to writhe to twist without the breakage of any covalent bonds.

Answer: c
Explanation: The sum of the twist number (Tw) and the writhing number (Wr) must remain equal to the linking number (Lk). This constraint is described by the equation:
Lk = Tw + Wr =>Tw = Lk – Wr.
advertisement

10. How can we remove supercoils from cccDNA?
a) Treat with DNase
b) Treat with detergent
c) Treat with endonuclease
d) Application of heat
View Answer

Answer: a
Explanation: One procedure is to treat the DNA mildly with the enzyme DNase I, so as to break on average one phosphodiester bond in each DNA molecule. Once the DNA has been “nicked” in this manner, it is no longer topologically constrained and the strands can rotate freely. 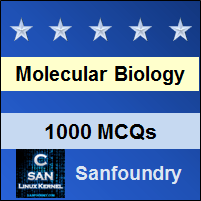