This set of Molecular Biology Questions and Answers for Campus interviews focuses on “Methylation of Eukaryotic DNA Controls Gene Expression – 2”.

Answer: d
Explanation: At certain sites, CpG dinucleotide occurs at a higher frequency and is referred to as CpG islands. CpG islands are approximately 1000 bases long and show an elevated G+C base composition.
advertisement

3. The Intergenic CpGs are more commonly methylated than in the intragenetic region.
a) True
b) False
View Answer

Answer: a
Explanation: CpG islands in the genome are located in both intragenic and intergenic regions. In vertebrates over 80% of the methylated cytosine residues are found in the intragenetic regions. In contrast CpGs within the CpG islands are generally either not methylated or have relatively low levels of methylation.
Subscribe Now: Molecular Biology Newsletter | Important Subjects Newsletters

4. Major methylation of CpG islands does not include?
a) Operator
b) Terminator
c) Introns
d) Enhancer
View Answer

Answer: d
Explanation: The methylation of the genome is persistent throughout and is missing only in regions such as CpG islands within the promoter and enhancer regions. Methylation in these two regions may lead to the silencing of the gene itself.

5. De-novo methylation leads to the phenomenon of genetic imprinting in the offspring.
a) True
b) False
View Answer

Answer: b
Explanation: Maintenance methylation leads to the phenomenon of genetic imprinting in the offspring. This phenomenon controls the expression of certain genes involved in the development of mammalian embryos.
Become Top Ranker in Molecular Biology Now!
advertisement

6. Both the imprinted genes inherited from either parent are expressed in an offspring.
a) True
b) False
View Answer

Answer: b
Explanation: In an offspring only one of the imprinted genes inherited from either parent is expressed. This phenomenon is known as allelic exclusion.

7. The phenomenon of allelic exclusion leads to the inactivation of one allele of a gene. The active allele is known as ____________
a) Homozygote
b) Homolog
c) Hemizygote
d) Hemilog
View Answer

8. Gene of which of the following protein/enzyme/hormone is an example of paternal Hemizygote?
a) Igf-1
b) Igf-2
c) β-globin
d) Insulin
View Answer

Answer: b
Explanation: An example of an imprinted gene in mammals is insulin like growth factor 2 or Igf-2 which encodes a growth factor. Only the paternal copy of the Igf-2 gene is transcribed and is not expressed from the maternally inherited chromosome.

To practice all areas of Molecular Biology for Campus Interviews, here is complete set of 1000+ Multiple Choice Questions and Answers. 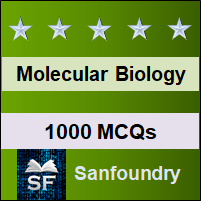