Answer: b
Explanation: Storm on YARN is powerful for scenarios requiring real-time analytics, machine learning and continuous monitoring of operations.

2. Point out the correct statement.
a) A Storm topology consumes streams of data and processes those streams in arbitrarily complex ways
b) Apache Storm is a free and open source distributed real-time computation system
c) Storm integrates with the queueing and database technologies you already use
d) All of the mentioned
View Answer

3. Storm integrates with __________ via Apache Slider.
a) Scheduler
b) YARN
c) Compaction
d) All of the mentioned
View Answer

Answer: c
Explanation: Impala is open source (Apache License), so you can self-support in perpetuity if you wish.

Answer: b
Explanation: You don’t have to worry about re-inventing the implementation wheel.

5. Point out the wrong statement.
a) Storm is difficult and can be used with only Java
b) Storm is fast: a benchmark clocked it at over a million tuples processed per second per node
c) Storm is scalable, fault-tolerant, guarantees your data will be processed
d) All of the mentioned
View Answer

Answer: a
Explanation: Storm is simple, can be used with any programming language.

9. __________ node distributes code across the cluster.
a) Zookeeper
b) Nimbus
c) Supervisor
d) None of the mentioned
View Answer

Answer: b
Explanation: Nimbus node is master node, similar to the Hadoop JobTracker.

10. ____________ communicates with Nimbus through Zookeeper, starts and stops workers according to signals from Nimbus.
a) Zookeeper
b) Nimbus
c) Supervisor
d) None of the mentioned
View Answer

Here’s the list of Best Reference Books in Hadoop.

To practice all areas of Hadoop, here is complete set of 1000+ Multiple Choice Questions and Answers.
Participate in the Sanfoundry Certification contest to get free Certificate of Merit. Join our social networks below and stay updated with latest contests, videos, internships and jobs! 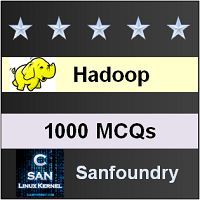