1. Which of the following is not a feature of the compiler?
a) Converts it into machine code
b) None of the mentioned
c) Slow for debugging
d) Execution time is more
View Answer

2. A programming language is to be designed to run on a machine that does not have a big memory.
a) Prefer a 2 pass compiler
b) Prefer an interpreter
c) Not support recursion
d) All of the mentioned
View Answer

Answer: d
Explanation: If a language designed to run on a machine then recursion should not be followed it should prefer 2 pass assembler and prefer an interpreter to a compiler.

Answer: b
Explanation: It creates a module to be loaded.
Sanfoundry Certification Contest of the Month is Live. 100+ Subjects. Participate Now!
advertisement
advertisement

4. Predictive parsers can be __________
a) Recursive
b) Constructive
c) Non recursive
d) Both Recursive and Constructive
View Answer

Answer: a
Explanation: The nature of predictive parsers can be Recursive.

5. Producer consumer problem can be solved using __________
a) Semaphores
b) Event counters
c) Monitors
d) All of the mentioned
View Answer

7. What is an example of intermediate language?
a) SNOBOL
b) PASCAL
c) COBOL
d) UNCOL
View Answer

8. In a two pass assembler the object code generation is done during the __________
a) Second pass
b) First pass
c) Zeroth pass
d) Not done by assembler
View Answer

Answer: a
Explanation: I second pass object code is generated. 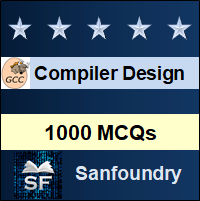