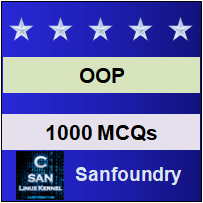 Answer: c
Explanation: The languages which support classes but doesn’t support polymorphism, are known as object-based languages. Polymorphism is such an important feature, that is a language doesn’t support this feature, it can’t be called as a OOP language.

3. Which among the following is the language which supports classes but not polymorphism?
a) SmallTalk
b) Java
c) C++
d) Ada
View Answer

Answer: d
Explanation: Ada is the language which supports the concept of classes but doesn’t support the polymorphism feature. It is an object-based programming language. Note that it’s not an OOP language.

4. If same message is passed to objects of several different classes and all of those can respond in a different way, what is this feature called?
a) Inheritance
b) Overloading
c) Polymorphism
d) Overriding
View Answer

5. Which class/set of classes can illustrate polymorphism in the following code?

7. In case of using abstract class or function overloading, which function is supposed to be called first?
a) Local function
b) Function with highest priority in compiler
c) Global function
d) Function with lowest priority because it might have been halted since long time, because of low priority
View Answer

Answer: b
Explanation: Function with highest priority is called. Here, it’s not about the thread scheduling in CPU, but it focuses on whether the function in local scope is present or not, or if scope resolution is used in some way, or if the function matches the argument signature. So all these things define which function has the highest priority to be called in runtime. Local function could be one of the answer but we can’t say if someone have used pointer to another function or same function name.

Answer: a
Explanation: Static member functions are not property of any object. Hence it can’t be considered for overloading/overriding. For polymorphism, function must be property of object, not only of class.

9. What is output of the following program?

Answer: a
Explanation: You need to focus on how the output is going to be shown, no space will be given after first message from base class. And then the message from derived class will be printed. Function disp() in base class overrides the function of base class being derived.
advertisement

Answer: c
Explanation: Only insertion operator can be overloaded among all the given options. And the polymorphism can be illustrated here only if any of these is applicable of being overloaded. Overloading is type of polymorphism.

11. Find the output of the following program.

12. Polymorphism is possible in C language.
a) True
b) False
View Answer

14. Which among the following is not true for polymorphism?
a) It is feature of OOP
b) Ease in readability of program
c) Helps in redefining the same functionality
d) Increases overhead of function definition always
View Answer

Answer: d
Explanation: It never increases function definition overhead, one way or another if you don’t use polymorphism, you will use the definition in some other way, so it actually helps to write efficient codes.

Answer: d
Explanation: Both of them are using polymorphism. It is not necessary that polymorphism can be used only once in a program, it can be used anywhere, any number of times in a single program.

To practice all areas of Object Oriented Programming (OOPs), here is complete set of 1000+ Multiple Choice Questions and Answers.