Answer: b
Explanation: The static data members are made common to all the object of a class. They doesn’t change from object to object. Those are property of class rather than of any individual object.
advertisement

2. Which keyword should be used to declare static variables?
a) static
b) stat
c) common
d) const
View Answer

Answer: a
Explanation: The keyword used to declare static variables is static. This is must be used while declaring the static variables. The compiler can make variables static if and only if they are mentioned with static keyword.

Answer: c
Explanation: The changes made from any function to static data member will be a common change for all the other objects also. If the change is made with respect to one object and change is printed from another object, the result will be same.
advertisement
advertisement

Answer: d
Explanation: The syntax must firstly be mentioned with the keyword static. Then the data type of the member followed by the member name should be given. This is general form of declaring static data members.

Answer: b
Explanation: The static data members must be defined outside the class. Since these are common to all the objects and should be created only once, they must not be defined in the constructor.
advertisement

Answer: a
Explanation: The syntax doesn’t contain the static keyword. Since it is already been declared as static inside the class. The data type and the corresponding class name must be there to allocate the variable to a class. The value is assigned using scope resolution operator for the member name.

10. Which data members among the following are static by default?
a) extern
b) integer
c) const
d) void
View Answer

Answer: c
Explanation: The const data members of any class are made static by default. This is an implicit meaning given by the compiler to the member. Since const values won’t change from object to object, hence are made static instead.

11. What is the output of the following program?

Answer: a
Explanation: The static data is same for all the objects. Instead of creating the same data each time an object is created, the compiler created only one data which is accessed by all the objects of the class. This saves memory and reduces redundancy.

Answer: d
Explanation: The static data members can be accessed in usual way as other members are accessed using the objects. The dot operator is used generally. Arrow can be used with the pointers.

14. What will be the output of the following program?

Answer: d
Explanation: The syntax given in option d doesn’t belong to any particular declaration or definition. First one is to access the static members using the class name. Second is to define the static data outside the class. Third syntax id to declare a data member as static in a class. 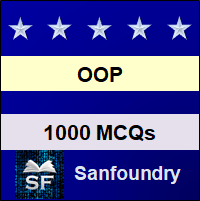