Answer: a
Explanation: 3-phase transformers are also used to power large motors and other heavy loads. A three-wire three-phase circuit is more economical than an equivalent two-wire single-phase circuit at the same line to ground voltage because it uses less conductor material to transmit a given amount of electrical power.

Answer: a
Explanation: 3-phase transformers can be manufactured by 2 methods. The three-phase transformer unit costs about 15% less than that of a bank and furthermore, the single unit occupies less space. There is little difference in reliability.

Answer: b
Explanation: It is cheaper to carry spare stock of a single-phase rather than a three-phase transformer. In underground use (mines) a bank of single-phase units may be preferred as it is easier to transport these units. The bank also offers the advantage of a de-rated open-delta operation when one single-phase unit becomes inoperative.
advertisement

Answer: c
Explanation: The 3-phase load bank is constructed by so that all three phases are made to be connected with together electrically. By the same time these banks form three magnetic circuits which are independent.

Answer: d
Explanation: Tappings are provided in order to maintain the terminal voltage across the loads within the permissible specified limits with respect to load variations. Tappings can be provided at phase end or neutral end of HV side. But to maintain magnetic symmetry tappings are preferred in the middle of the winding only.

Answer: b
Explanation: Generally, tappings are preferred on HV side, because the HV side is low current-high voltage side, tap changer involves low current interruption and large variations or small steps are possible due to more no of turns.

9. In core type 3-phase transformer flux path chooses how many paths to return?
a) 2
b) Single
c) 3
d) Many
View Answer

Answer: a
Explanation: Flux of each limb in core type uses the other two limbs for its return path with the three-magnetic flux’s in the core generated by the line voltages differing in time-phase by 120 degrees. Thus, the flux in the core remains nearly sinusoidal, producing a sinusoidal secondary supply voltage.
advertisement

Answer: b
Explanation: The shell-type five-limb type three-phase transformer construction is heavier and more expensive to build than the core-type. Five-limb cores are generally used for very large power transformers as they can be made with reduced height.

11. A three-phase transformer generally has the three magnetic circuits interlaced.
a) True
b) False
View Answer

Answer: b
Explanation: A three-phase transformer generally has the three magnetic circuits which are interlaced to give a uniform distribution of the dielectric flux between the high and low voltage windings. The exception is a three-phase shell type transformer. In the shell type of construction, even though the three cores are together, they are non-interlaced.

To practice all areas of Transformers, here is complete set of 1000+ Multiple Choice Questions and Answers. 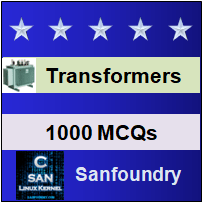