This set of Virology Quiz focuses on “Humans Viruses – Papillomaviruses”.

1. The assembly of virion of papillomavirus occurs in the ___________
a) mitochondria
b) nucleus
c) cytoplasm
d) plasma membrane
View Answer

Answer: b
Explanation: The assembly of virion of papillomavirus occurs in the nucleus of the host cell. The viral genome migrates to the nucleus where transcription, DNA replication, and virion assembly occurs.

2. Which of the following is the disease of the skin caused by papillomaviruses?
a) Flat wart
b) Epithelial hyperplasia
c) Oral papilloma
d) Genital malignancies
View Answer

Answer: a
Explanation: Flat wart is a skin disease caused by papillomaviruses and is mostly found in children and young adults. It is also known as juvenile warts. They disappear on their own and do not require any treatment.

3. Which of the following is a genital tract infection?
a) Butcher’s wart
b) Epidermodysplasia verruciformis
c) Epithelial hyperplasia
d) Condyloma acuminatum
View Answer

Answer: a
Explanation: The cell-mediated immunity (CMI) plays a major role in combating papillomavirus infections. The deficiencies of CMI leads to high frequencies of genital warts as well as anogenital neoplasias.

Answer: a
Explanation: The Cervarix vaccine is highly effective in preventing HPV infections. It prevents 100 percent of the precancerous cervical cell changes caused by the types of HPV targeted by the vaccine.

To practice all areas of Virology for Quizzes, here is complete set of 1000+ Multiple Choice Questions and Answers. 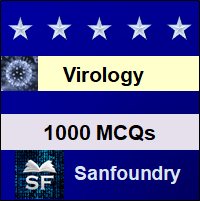