Answer: b
Explanation: The viruses outside their host cells survive as virus particles, which is also known as virions. The virion contains the viral genome and is a gene delivery system.

Answer: a
Explanation: The viral genome is packaged into a structure made up of protein. This outer protein structure is known as a capsid. Its main function is to protect the viral nucleic acid from digestion by enzymes.

3. Which of the following is not the category of virus genome?
a) dsDNA
b) ssRNA
c) tsDNA
d) dsRNA
View Answer

6. Which of the following virus possess a single-stranded, linear genome?
a) TMV
b) Poxvirus
c) Baculovirus
d) Reovirus
View Answer

7. Which of the following is the most common capsid shape of the virus?
a) Cube
b) Rod
c) Cone
d) Icosahedron
View Answer

Answer: d
Explanation: The most common capsid shape of the virus is icosahedron and helical symmetries. Some of the examples of symmetrical structures are rod, helix, cone, and icosahedron. An icosahedron is an object or symmetry with 20 faces, 12 vertices, and 30 edges.

Answer: c
Explanation: The number of subunits in a virus particle is given by T = Pf2, where T is the triangulation number. P is given by the expression h2 + hk + k2. In this expression, h and k are any pair of integers without common factors, i.e. h and k cannot be multiplied or divided by any number to give the same values, f = 1, 2, 3, 4, etc.

10. The viral envelope is made up of protein bilayer.
a) True
b) False
View Answer

Answer: b
Explanation: The viral envelope is made up of the lipid component, which is present at the surface of virion or present within the virion. It protects the capsid and may help viruses avoid the host immune system.

Answer: b
Explanation: The genome of viruses contains several repeated sequences which include promoters, enhancers, the origin of replication, and other important elements that are involved in the control of events in the replication of the virus. 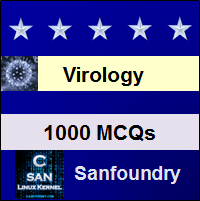