Answer: c
Explanation: The reaction is hydrogenation reaction and is as follows: R-CC-R’ + H2 —–>R-CH2-CH2-R.

Answer: b
Explanation: Selective hydrogenation of the acetylene to ethylene is accomplished by passing the mixture, which also contains 10-35 per cent of hydrogen, over a catalyst at a temperature ranging from 200-315°C and at pressures of 45-155 psig.

3. In presence of what, the compounds undergo catalytic hydrogenation?
a) Nickel
b) Platinum
c) Palladium
d) All of the mentioned
View Answer

4. Fill in the blank: _____ molecular weight olefins are generally hydrogenated in the liquid phase.
a) Lower
b) Higher
c) Moderate
d) None of the mentioned
View Answer

Answer: b
Explanation: Higher-molecular-weight olefins are generally hydrogenated in the liquid phase unless their volatility is sufficient at the temperature of hydrogenation (150-200°C), in which case the reaction may be conducted in the vapour phase.

5. What are the properties of Polybutadiene?
a) Thermoplastics
b) Oil resistance
c) Tensile strength
d) All of the mentioned
View Answer

Answer: d
Explanation: Polybutadiene may be hydrogenated over nickel catalyst at 260°C to hydrorubbers (Hydropol) of various degrees of unsaturation. These rubbers have outstanding properties as thermoplastics, especially as to low temperature properties, oil resistance, and tensile strength.
Check this: Unit Processes Books | Chemical Engineering MCQs

8. The catalytic reduction of aromatics require on Liquid phase.
a) True
b) False
View Answer

Answer: b
Explanation: The catalytic reduction of aromatics may be carried out either in the vapour phase at atmospheric pressure or in the liquid phase at hydrogen pressures or 100-200 atm.

9. Olefins rapidly hydrogenate at what temperature?
a) Lower
b) Moderate
c) Higher
d) None of the mentioned
View Answer

Answer: a
Explanation: Olefins rapidly hydrogenate at a much lower temperature, such a difference in reactivity is the basis of an analytical procedure for differentiating between olefinic and aromatic bonds.
advertisement

10. Which is the most widely used catalyst for hydrogenation if aromatics?
a) Cadmium
b) Zinc
c) Nickel
d) Iron
View Answer

Answer: c
Explanation: Nickel is the most widely used catalyst for hydrogenating aromatic nuclei, other catalysts such as platinum oxide and rhodium also are useful.

11. Aldehydes are reduced more rapidly than ketones.
a) True
b) False
View Answer

Answer: a
Explanation: Aldehydes are reduced more rapidly than ketones, although there are numerous examples in which both aldehydes and ketones undergo reduction at room temperature and at only a few atmospheres of hydrogen pressure in the presence of platinum or palladium catalysts. 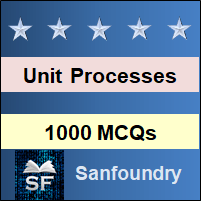