1. Before conducting the resection procedure, orientation must be performed.
a) True
b) False
View Answer

Answer: b
Explanation: Resection is done after the table has been properly oriented. If there is any mistake in orientation, the entire process will go wrong and may end up repeating again.
advertisement

2. Which of the following processes is employed in case of a small scale?
a) Trisection
b) Intersection
c) Radiation
d) Resection
View Answer

Answer: d
Explanation: Resection is based on the orientation of the table which needs much more care for handling the process. Covering a large area by the resection method makes it a tedious process. So, it is adopted for small scale.

3. Which of the following indicates the procedure for plotting of points occupied by the plane table?
a) Resection
b) Bisection
c) Trisection
d) Intersection
View Answer

Answer: a
Explanation: Both resection and traversing are done so as to obtain the station points. Those are used for placing the plane table and locating the remaining points.

4. The rays which are drawn from unknown location to a known location can be determined as ____________
a) Trisectors
b) Bisectors
c) Resectors
d) Intersectors
View Answer

Answer: c
Explanation: Resection method involves in the usage of resectors. Resectors are the rays which can be drawn from an unknown location to a known location. So, a relation can be established between the points.

Answer: d
Explanation: Three point method has been further classified as mechanical method, Lehman’s method and graphical method. Each of them will be employed based on the type of work being done and the visibility of points.

7. The figure indicates which of the following procedures? 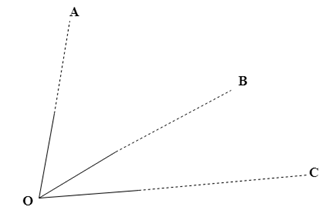 Answer: b
Explanation: As it can be clearly seen that the station point can visualize three individual points, which makes it fall under the category of three point problem.

8. Which of the following must be done correctly in order to prevent further errors?
a) Usage of alidade
b) Back sighting
c) Orientation
d) Traversing
View Answer

Answer: c
Explanation: resection method is employed for having a clear idea about the station points. So, it requires proper orientation of the table to continue further. Error in orientation can be corrected by following the classification methods.

10. Which among the following procedures is used in case of visibility of points is more from table station?
a) Three point problem
b) Two point problem
c) Compass orientation
d) Back sighting orientation
View Answer

To practice all areas of Surveying, here is complete set of 1000+ Multiple Choice Questions and Answers.