1. The average value of the quality characteristic corresponding to in-control state is represented by _____ in the control charts.
a) CL
b) UCL
c) LCL
d) Sample number
View Answer

Answer: b
Explanation: The UCL is the highest value of a quality characteristic at which the process is in-control, i.e. it produces products of desired specifications.

Answer: b
Explanation: The lowest value for a Critical-to-quality characteristic corresponding to in-control state is shown on the control chart with the lowest horizontal line, which is called the lower control limit line.

Answer: c
Explanation: The horizontal axis of a control chart displays either sample numbers or time elapsed from a certain time or from the time of process starting.

5. If for a process, 18 out of 20 points are plotted above the CL but below the upper control limit, and only 2 of 20 are plotted between the center line and the lower control limit, what can we say about the process state?
a) In-control
b) Out-of-control
c) Data is not enough to predict
d) Process state is not dependent over this data
View Answer

Answer: b
Explanation: The above question concludes a systematic pattern. For a process to be perfectly in-control state, the plotted points on the corresponding control chart should have an essentially random pattern.
advertisement

6. Shifting of mean from the current value to a new value and remaining there, is called _____ shift of the mean.
a) Continuous
b) Abrupt
c) Random
d) Sustained
View Answer

Answer: d
Explanation: Due to some reason, it may be possible that the process mean shifts from one point to another, and remain there for quite some time. This shifting of mean is called the sustained shift of the mean.

8. Which of these is not a part of SPC’s 7 tools?
a) Pareto chart
b) Histogram
c) Design of Experiments
d) Check sheet
View Answer

Answer: c
Explanation: Pareto chart, check sheet, histogram, cause-and-effect diagram, scatter diagram, and control chart are all part of SPC (Statistical Process Control). Design of Experiments is not one of them.

9. If a process has its operation with _________ causes of variation, it is said to be an out-of-control process.
a) Chance
b) Assignable
c) Neither chance nor assignable
d) Out-of-control
View Answer

11. The chance and assignable cause terminology was developed by _______
a) Deming
b) Hawthorne
c) ISO
d) Shewhart
View Answer

12. OC curve can be used to determine the probability of _______
a) Type I error
b) Type II error
c) Both type I and type II error
d) Neither type I nor type II error
View Answer

Answer: b
Explanation: OC curve for any process is a very useful tool to find out the probability of a type II error which means, concluding the process in-control when it is actually out-of-control.

13. Control charts can be used very effectively in the process of hypothesis testing.
a) True
b) False
View Answer

14. Type I error is described as the situation of the conclusion of the process state as out-of-control when it is in-control.
a) True
b) False
View Answer 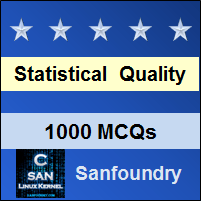