Answer: c
Explanation: X-rats are electromagnetic radiation. They occur in that part of the electromagnetic spectrum between ϒ-rays and the ultraviolet. X-rays are produced when high energy charged particles e.g. electrons accelerated through high voltage.

Answer: b
Explanation: The electrons are slowed down or stopped by the collision and some of their lost energy is converted into electromagnetic radiation, such processes give ‘white radiation’.

Answer: a
Explanation: X-rays have wavelengths ranging upwards from limiting value. This lower wavelength limit corresponds to the X-rays of highest energy and occurs when all the kinetic energy of the incident particles s converted into X-rays.
Subscribe Now: Solid State Chemistry Newsletter | Important Subjects Newsletters

Answer: c
Explanation: The X-rays which are used in almost all diffraction experiments are produced by a different process that leads to monochromatic X-rays. An electron in an outer orbital drops down to occupy he vacant 1s level and the energy in the transition appears as X-radiation.

Answer: a
Explanation: For copper, the transition 2p→1s, is called Kα, has a wavelength of 1.5418 A˚ and 3p→1s transition, Kβ, 1.3922 A˚. The Kα transition occurs much more frequently than the Kβ and it is these more intense Kα radiations which results that is used in diffraction experiments.
Check this: Biotechnology Books | Biotechnology MCQs

6. Which of the following statements is true for Kα transition?
a) It is singlet
b) It is doublet
c) It is triplet
d) It is four let
View Answer

Answer: b
Explanation: Kα is a transition from 2p→1s, and it is a doublet because the transition has slightly different energy for the two possible spin states of the 2p electron while makes the transition, relative to the spin of the vacant 1s orbital.

Answer: a
Explanation: The X-ray emission spectrum of an element such as copper has two features. The intense, monochromatic peaks, caused by electronic transitions within the atoms, have wavelengths that are characteristic of the element i.e. copper. These monochromatic peaks are superposed on a background of ‘white radiation’.
advertisement

8. In order to generate the monochromatic radiation, what is voltage required to accelerate the electrons?
a) >10V
b) <10V
c) >10kV
d) <10kV
View Answer

Answer: c
Explanation: To generate the characteristic monochromatic radiation, the voltage used to accelerate the electrons need to be sufficiently high i.e. > or = 10kV so that ionization of the copper 1s electrons may occur.

9. In the X-ray tube which of the following element is used as window materials?
a) Boron
b) Carbon
c) Hydrogen
d) Beryllium
View Answer

Answer: d
Explanation: In X-ray tube, the X-rays leave the tube through ‘windows’ made of beryllium. The absorption of X-rays on passing through materials depends on the atomic weight of the elements present in the material. Thus beryllium with an atomic number of 4 is therefore one of the most suitable window materials.
advertisement 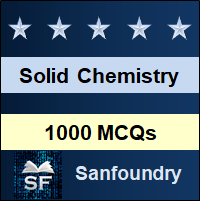