1. Intensities of X-ray reflections is important because___________
a) The quantitative measurements of intensity are neccasary
b) X-ray is detected using intensity
c) Intensity is required during determining the concentration
d) The environmental condition is suited using intensities
View Answer

Answer: a
Explanation: Intensities of X-rays are important for two main reasons. First, quantitative measurements of intensity are necessary in order to determine unknown crystal structures. Second, qualitative or semi-quantitative intensity data are needed in using the power fingerprint method to characterize materials and especially in using the powder diffraction file to identify unknowns.
advertisement

Answer: b
Explanation: An Atom diffract or scatter X-rays because of incident X-ray beam which can be described as an electromagnetic wave with an oscillating electric field, sets each electron of an atom into vibration.

3. The electrons of an atom act as which of the following options for the sources of X-rays?
a) Electrode
b) Primary source
c) Secondary source
d) Tertiary source
View Answer

Answer: c
Explanation: A vibrating charge such as an electron emits radiation and this radiation in in phase or coherent with the incident X-ray beam. The electrons of an atom therefore act as the secondary point sources of X-rays.

4. The intensity of the radiation scattered coherently by ‘point source’ electrons has been treated theoretically and is given by which of the following equations?
a) Einstein equation
b) Maxwell equation
c) Stockbarger equation
d) Thomson equation
View Answer

Answer: c
Explanation: The Thomson equation which is used to measure the intensity of the radiation scattered coherently by ‘point source’ electrons is also known as polarization factor and is one of the standard angular correction factors that must be applied during the processing of intensity data (for use in structure (determination).
Advertisement: Join [email protected]

6. For the non-crystalline beams are scattered by the atoms _________
a) From top to bottom
b) In horizontal direction
c) In vertical direction
d) In all direction
View Answer

Answer: d
Explanation: Each atom in a material acts as a secondary point source of X-rays. If the material is non-crystalline, beams are scattered by the atoms in all directions, but in crystalline materials the scattered beams interfere destructively in most possible directions.

7. Intensities depends on which of the following factors?
a) Solubility of the solid
b) Emission factor
c) Refraction factor
d) Absorption factor
View Answer

10. The mental picture of atom is sphere can be given by which of the following?
a) Pauli exclusion principle
b) Maxwell equation
c) Electron density map
d) Stockbarger equation
View Answer

Answer: c
Explanation: Electron density maps also show that our mental picture of atoms as spheres is essentially correct, at least on a time average. The electron density drops to almost zero at some point along point along the line connecting pairs of adjacent atom and this supports the model of ionic bonding in NaCl. 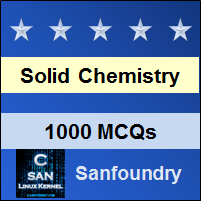