Answer: a
Explanation: Static Testing tools are those that perform analysis of the the program without executing them at all.
advertisement

4. Software Testing with real data in real environment is known as
a) alpha testing
b) beta testing
c) regression testing
d) none of the mentioned
View Answer

Answer: b
Explanation: Beta testing is the last stage of testing, and normally can involve sending the product to beta test sites outside the company for real-world exposure or offering the product for a free trial download over the Internet.

Answer: b
Explanation: A static analyzer operates from a pre-computed database o descriptive information derived from the source text of the program.
advertisement

7. Beta Testing is done by
a) Developers
b) Testers
c) Users
d) All of the mentioned
View Answer

Answer: b
Explanation: This tool looks at only single statements.

9. Debugging Program is a program which runs concurrently with the program under test & provide commands to
a) examine memory & registers
b) stop execution at a particular point
c) search for references for particular variables, constant and registers
d) all of the mentioned
View Answer

Answer: d
Explanation: Debugging is a methodical process of finding and reducing the number of bugs, or defects, in a computer program or a piece of electronic hardware, thus making it behave as expected.

Answer: b
Explanation: None.
advertisement

Here’s the list of Best Reference Books in Software Engineering. 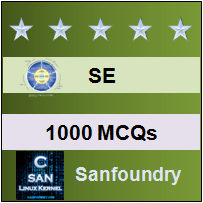