Answer: d
Explanation: q = h(Tg – Tl) is the correct expression for heat transferred per unit area. This relation assumes that the heat flow is radial in direction.

Answer: c
Explanation: q = hg (To – Twg) is the correct expression for heat transferred per unit area q. This is true for a regeneratively cooled thrust chamber. The strength of the material as well as its thermal properties are considered to be a function of temperature.
advertisement

8. The quantity hgD/k, where hg is the gas film coefficient, D is the diameter of the chamber and k denotes the gas conductivity is __________
a) Bartz number
b) Froude number
c) Nusselt number
d) Prandtl number
View Answer

Answer: c
Explanation: hgD/k is called as the Nusselt number. This is a parameter which comes into picture while dealing with heat transfer problems between a solid body and a moving fluid.

9. The quantity μCp/k, where μ is the absolute gas viscosity, Cp is the specific heat of gas at constant pressure and k is the thermal conductivity is called as _________
a) Nusselt number
b) Bartz number
c) Prandtl number
d) Froude number
View Answer

Answer: c
Explanation: μCp/k is the Prandtl number. It is the ratio of momentum diffusivity to thermal diffusivity.
advertisement 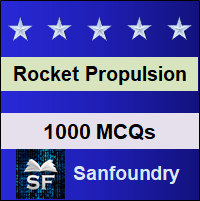