Answer: a
Explanation: In railways terminology, obligatory points are the points through which the rail line must pass due to political or commercial reasons and also taking into consideration the technical aspects. These may include major towns and cities, major bridges, etc.

Answer: a
Explanation: Obligatory points are also known as controlling points. For a good alignment, shortest possible route should be chosen but it should also pass through intermediate major cities which are of commercial or political importance.

3. If the gradient exceeds the ruling gradient, which technique much be adopted?
a) Control technique
b) Development technique
c) Management technique
d) Ruling technique
View Answer

Answer: b
Explanation: Generally, in case of mountainous terrain the gradient to be provided exceeds the ruling gradient. In order to avoid this, development technique is adopted in which the length of the rail line is increased, thereby decreasing the gradient.

4. Which of the following method of rail alignment is preferred in case of steep side slopes?
a) Zigzag line method
b) Switch back method
c) Spiral method
d) Cubic method
View Answer

Answer: b
Explanation: If a steep side slope is present, switch back method of rail alignment is used. In this method, the direction of the train route is reversed by providing a switch. The train has to necessarily stop and change direction.

5. Which type of rail alignment method does the figure depict? 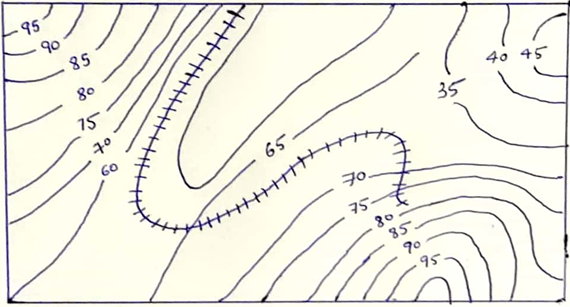 Answer: a
Explanation: The figure depicts the zigzag line method of alignment. It is used when mountainous terrain is encountered. In this method, the railway line passes in a zigzag manner and it turns approximately 180 degree (like a horseshoe pattern) to gain the required height.

Answer: a
Explanation: The spiral method or complete loop method of alignment is used in a narrow valley, especially where a small bridge has been constructed. A railway line completes a loop and crossed itself at a higher level.

7. The alignment of a rail line should pass through a place that faces ______ the direction of wind.
a) Towards
b) Away from
c) Towards or away from
d) At an angle of 30 degree from
View Answer

Answer: a
Explanation: A railway line should always cross a road at 90° angle, i.e. they should be perpendicular to each other. This is done so that the passing train is clearly visible to the road passengers, thus avoiding accidents.

10. The alignment of railway line should be such that it attracts minimum traffic.
a) True
b) False
View Answer

Answer: b
Explanation: False. The alignment of a rail line should attract maximum traffic. More the traffic on the rail line more will be the gross revenue earned. Therefore, maximum emphasis should be on attracting more traffic.

11. A railway line passes through a terrain which crosses watershed areas of two or more streams. Which type of alignment can be preferred?
a) Plane alignment
b) Mountain alignment
c) Cross country alignment
d) Valley alignment
View Answer

To practice all areas of Railway Engineering, here is complete set of 1000+ Multiple Choice Questions and Answers.