1. Who among these is an ancient linguist of India?
a) Patanjali
b) Tista Bagchi
c) Noam Chomsky
d) Kshetresa Chandra Chattopadhyaya
View Answer

Answer: a
Explanation: Linguistics is the study of language. Patanjali, the ancient linguist of India, considered it as a human expression uttered out by speech organs. The other three are modern linguists belonging to 19th and 20th century.
advertisement

2. Which of these people perceives language as a means to interpret human experience?
a) Anthropologist
b) Sociologist
c) Philosopher
d) Students of literature
View Answer

3. Language is a social phenomenon.
a) True
b) False
View Answer

Answer: a
Explanation: Language is a social phenomenon. Man may not have needed a language if he had not made himself a part of a social group. A language must thus convey social realities if it is to become an effective means of communication.
advertisement
advertisement

4. Which of these words is based on the phenomena, ‘Onomatopoeia’?
a) Cuckoo
b) Book
c) Door
d) Blackboard
View Answer

Answer: a
Explanation: Language is arbitrary, that is there is no logical link between any gjven feature of a language and its meaning. The only exception is in the case of onomatopoeia, where the words imitate the sounds of their referents. Here, cuckoo is the sound made by the bird which is how the bird got its name.

5. Which of these is not a type of linguistics?
a) Historical
b) Personal
c) Comparative
d) Synchronic
View Answer

7. Which of these is not a level of language?
a) Phonology
b) Grammar
c) Running
d) Semantics
View Answer

8. Which of these terms refers to the study of speech sounds of a given language and their function within the sound system of that language?
a) Phonetics
b) Phonology
c) Syntax
d) Morphology
View Answer 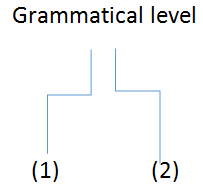 Answer: b
Explanation: Grammatical level can be divided into 2 broad levels. These are Syntax and Morphology. Syntax is the science to study and lay down the rules regarding the grammatical arrangement of words in a sentence. Morphology is the study and analysis of the structure, form and classes of words.

To practice all areas of Professional Communication, here is complete set of 1000+ Multiple Choice Questions and Answers.