This set of Probability and Statistics Questions and Answers for Entrance exams focuses on “Sampling Distribution of Means”.

3. The method of selecting a desirable portion from a population which describes the characteristics of whole population is called as ________
a) sampling
b) segregating
c) dividing
d) implanting
View Answer

Answer: a
Explanation: The method of selecting a desirable portion from a population which describes the characteristics of whole population is called as Sampling. It is useful in combining the related samples and hence making the distribution easy to manipulate.
Note: Join free Sanfoundry classes at Telegram or Youtube
advertisement
advertisement

Answer: d
Explanation: In sampling distribution the parameter k represents Sampling interval. It represents the distance between which data is taken.
Check this: Probability and Statistics Books | Numerical Methods MCQ

Answer: c
Explanation: The cluster sampling, stratified sampling or systematic samplings are types of random sampling. The advantage of probability sampling methods is that they ensure that the sample chosen is representative of the population.
advertisement

8. Which of the following is classified as unknown or exact value that represents the whole population?
a) predictor
b) guider
c) parameter
d) estimator
View Answer

Answer: c
Explanation: The unknown or exact value that represents the whole population is called as parameter. Generally parameters are defined by small Roman symbols.

Answer: a
Explanation: Generally a sample having 30 or more sample values is called a large sample. By the Central Limit Theorem such a sample follows a Normal Distribution.
advertisement

Answer: a
Explanation: In Cluster the population is divided into various groups called as clusters. The selected clusters in a sample are called as elementary units.

To practice all areas of Probability and Statistics for Entrance exams, here is complete set of 1000+ Multiple Choice Questions and Answers. 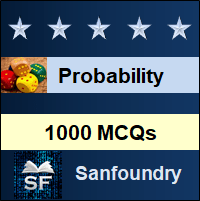