Answer: b
Explanation: Sintered P/M parts may need additional processing to impart certain characteristics such as improved corrosion resistance, dimensional tolerances or improved strength. Thus, P/M parts are subjected to a number of secondary operations after sintering. Sizing, repressing, and coining involve deformation of the sintered part at room temperature.

2. _______ is a post sintering operation used to correct the dimensional defects during sintering.
a) Joining
b) Infiltration
c) Sizing
d) Impregnation
View Answer

Answer: c
Explanation: Sizing is a post sintering operation used to correct size, warping, distortion and other dimensional defects during sintering. It can also be used to improve the surface finish and wear properties of the surface.

Answer: c
Explanation: A thin-walled bushing which is oversize on both inside and outside diameter after sintering can be subjected to positive sizing on outside, and negative sizing on inside.

5. In sizing the amount of deformation is _____ and improvement in density is ______
a) Moderate, constant
b) Small, minimal
c) Minimal, zero
d) Large, significant
View Answer

Answer: b
Explanation: In sizing, the amount of deformation is small and hence the force required for deformation is less in comparison to the compaction force. The forces involved in sizing are small and, therefore, the improvement in density is minimal.

6. ________ is used for adding surface patterns on to a sintered part.
a) Coining
b) Sizing
c) Plating
d) Resintering
View Answer

Answer: a
Explanation: Coining is used for adding surface patterns on to a sintered part. The coining operation carried out after sintering achieves the same results as the sizing operation, but there is significant improvement in density, hardness, and strength because of higher pressures used compared to sizing.

Answer: c
Explanation: Hot coining is a useful technique for cermets. Hot coining consists in the rapid coining of a hot sintered compact directly from the sintering furnace. The bright, clean surfaces within the porous sintered compact are compressed and deformed, producing a sound, highly dense body.

8. _________ is done to reduce dimensional scatter as well as to obtain closure of surface pores.
a) Machining
b) Plating
c) Sizing
d) Repressing
View Answer

Answer: d
Explanation: The primary aim of repressing is densification of the sintered part to give improved physical and mechanical properties along with dimensional tolerances. Thus, most of the P/M parts are repressed to reduce dimensional scatter as well as to obtain closure of surface pores.

9. External lubrication is not preferred for sizing, coining, and repressing.
a) True
b) False
View Answer

Answer: b
Explanation: Use of external lubricants (liquid or dry) is preferred for various post sintering operations like sizing, coining, and repressing and care should be taken to avoid retention of lubricant by the part which may interfere with further operations like plating.

Answer: d
Explanation: For repressing, the compact and tool sizes are the same and material flow is in one direction only. With a repressing treatment, pores near the surface are sealed but internal pores remain mostly unaffected. After repressing, there is slight increase in strength with a reduction in ductility and toughness and fatigue strength improves. 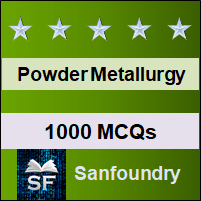