1. What shows the overall deterioration of the concrete in cement concrete pavement?
a) Shedding
b) Scaling
c) Scaring
d) Scraping
View Answer

2. The warping cracks in the rigid pavement are formed in the shape of S.
a) True
b) False
View Answer

Answer: b
Explanation: Warping stresses if not relieved, can lead to the development of warping cracks. These cracks start from the edge of the pavement and proceed in an irregular pattern there is no S shape crack formed.

Answer: b
Explanation: Joint spalling is a failure of the rigid pavement. In this type of failure, the concrete slab breaks near the edge of the joints. The faulty joints lead to failure.
Sanfoundry Certification Contest of the Month is Live. 100+ Subjects. Participate Now!
advertisement
advertisement

4. When does the shrinkage crack normally develop in the rigid pavement?
a) During placing
b) After completion
c) During curing
d) After placing
View Answer

Answer: c
Explanation: The curing of the cement concrete slab is carried out soon after the completion of the construction of the slab. It is during this period that the shrinkage cracks are developed. So, careful consideration has to be taken while curing the slab.

5. When soil slurry comes out from the cracks or joint gaps, it is called ______
a) Soil pumping
b) Pumping
c) Mud pumping
d) Slurry pumping
View Answer

Answer: c
Explanation: Pumping is a general term used to represent the phenomenon where the materials from beneath the slab start coming out onto the surface through the cracks and the gaps between the joints. When soil slurry comes out, it is called mud pumping.
Check this: Civil Engineering MCQs | Civil Engineering Books

6. Which of the below is not a cause for the failure of rigid pavement?
a) Hard aggregates
b) Poor surface finish
c) Insufficient curing
d) Poor joint filler
View Answer

Answer: a
Explanation: The general reasons that can cause the failure of the rigid pavement are the use of soft aggregates, poor workmanship in joint construction, poor surface finish, improper and insufficient curing, and poor joint filler and sealant material.

7. Which of the below is not a cause for the scaling of concrete in the rigid pavement?
a) Improper mix design
b) Freeze/thaw cycle
c) Excess vibration during compaction
d) Laitance of concrete
View Answer

Answer: b
Explanation: There are four major causes of the scaling in concrete. They are improper mix design, excessive vibration during compaction, laitance of concrete and performing finishing operations without removing the bleed water from the surface. The freeze/thaw cycle is one of the causes of joint spalling.
advertisement

8. There is no structural defect due to warping cracks.
a) True
b) False
View Answer

Answer: b
Explanation: It cannot be ascertained that there is no structural defect due to warping cracks. It can be avoided if proper reinforcements are provided in the longitudinal as well as the transverse joints because these take care of the structural adequacy.

9. The inadequate thickness of the pavement would not lead to which defect mentioned below?
a) Mud pumping
b) Settlements of slab
c) Widening of joints
d) Spalling of joints
View Answer

10. What is the difference in elevation between the joints called?
a) Faulting
b) Rising
c) Slating
d) Referring
View Answer

Answer: a
Explanation: Faulting is the defect that arises when there is a difference in the elevation between joints. The causes for this might be any one of the following – pumping, temperature and moisture changes or settlement of the pavement.

To practice all areas of Pavement Design, here is complete set of 1000+ Multiple Choice Questions and Answers. 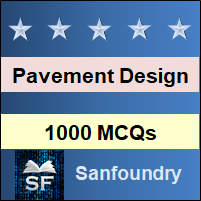