1. Which of the following is distinguish test for ether?
a) Lucas test
b) FeCl3 test
c) Molisch test
d) Zeisel test
View Answer

Answer: d
Explanation: The Zeisel determination or Zeisel test is a chemical test for the presence of esters or ethers in a chemical substance. In a qualitative test a sample is first reacted with a mixture of acetic acid and hydrogen iodide in a test tube.

2. Which of the following statement is not true about ethers?
a) The lower ethers are highly volatile and flammable
b) Lower ethers also act as anaesthetics
c) Ethers are not organic solvents
d) Simple ethers (such as diethyl ether) are tasteless
View Answer

Answer: d
Explanation: The ether are less volatile than alcohol of same molecular mass because in alcohols there is intermolecular H-bonding which makes it less volatile and High B.P. But in case of ether there is no intermolecular H-Bonding which makes it more volatile and less B.P.
Note: Join free Sanfoundry classes at Telegram or Youtube
advertisement
advertisement

Answer: d
Explanation: Alcohols have much higher boiling points than the comparable alkanes or the related ethers because molecules of alcohols can interact through hydrogen bonding while those of alkanes and ethers cannot. Thus, Ethanol has a higher boiling point (78℃) than dimethyl ether (−25℃) though they have the same molecular weight.

5. Which of the following has lower boiling point than dimethyl ether?
a) Pentane
b) Propane
c) Tetrahydrofuran
d) n-butanol
View Answer

Answer: b
Explanation: The difference in molecular weight made difference between boiling point here mainly. It would be best to set up a better comparison and then ask the question. diethyl ether is a chain of 5 atoms in a row. The appropriate alkane to compare it to is pentane, also 5 atoms in a row. Ethane only has two carbons (CH3-CH3).
Take Organic Chemistry Mock Tests - Chapterwise!
Start the Test Now: Chapter 1, 2, 3, 4, 5, 6, 7, 8, 9, 10

6. Which of the following statements about ethers is incorrect?
a) Ethers are flammable
b) Ethers form peroxides by free radical oxidation
c) Ethers are widely used as extraction solvents
d) An ether oxygen can only be found within an acyclic carbon chain
View Answer

Answer: d
Explanation: Although widely used as extraction solvents ethers are highly flammable and readily form peroxides by free radical oxidation. An ether oxygen can be present in an open chain or as part of a cyclic system.

7. Which of the following product is formed, when ether is exposed to air?
a) Oxide
b) Alkanes
c) Alkenes
d) Peroxide of diethyl ether
View Answer

Answer: d
Explanation: On exposure to air ether form peroxide of diethyl ether, as shown in below reaction.

Answer: d
Explanation: When C2H5OH reacts with sodium metal and forms C2H5ONa and on heating with H2SO4 giver diethyl ether.

9. What is the smell of the diethyl ether?
a) Vinegar
b) Sweet smell
c) Rotten egg
d) Fish like smell
View Answer

Answer: b
Explanation: Diethyl ether has a rather sweet, ethereal smell. It might have a hint of an alcohol-like odor, very penetrating.
advertisement

10. Which of the following Is the correct reason for cyclic ether are miscible in water?
a) Planer structure
b) Larger size
c) Molecular weight
d) Hydrogen bonding
View Answer

Answer: d
Explanation: Cyclic ethers such as tetrahydrofuran and 1,4-dioxane are miscible in water because of the more exposed oxygen atom for hydrogen bonding as compared to linear aliphatic ethers. 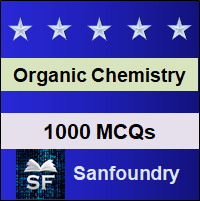