1. Which type of position can be determined by a position sensor?
a) Mechanical position
b) Lateral position
c) Prone position
d) Lithotomy position
View Answer

Answer: b
Explanation: LIDAR stands for Light Detection and Ranging. It emits optical laser light in pulses and can detect the X,Y,Z co-ordinates of an object. This technology is widely used in archaeological surveys.

Answer: b
Explanation: Proximity sensor is a non-contact type of position sensor. There are several type of proximity sensors that uses electromagnetic fields, light and sound for detection of the objects and their position.

Answer: d
Explanation: OptoNCDT 1420 in an example of Laser triangulation type position sensor. This sensor can detect the position as well as the distance covered by a particular object. They provide very high accuracy and has set a milestone in the field of position sensing.

Answer: b
Explanation: Inductive proximity sensor works on the principle of Faraday’s law of Induction. According to this, the magnitude of the electromotive force induced is directly proportional to the change in the magnetic flux that cuts through it.

Answer: a
Explanation: OptoNCDT ILR 1030 is laser sensor used for computing distance and objects placed at very high distances. They are very precise and accurate. The range of these sensors varies from 10m to 3000 metres. 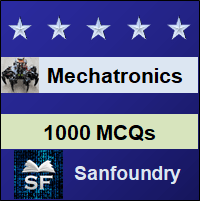