1. A/An __________ is a line segment connecting two non-consecutive vertices of a polygon.
a) diagonal
b) side
c) median
d) altitude
View Answer 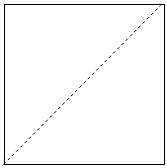 4. Which of the following quadrilaterals has two pairs of adjacent sides equal and diagonals intersecting at right angles?
a) Rhombus
b) Parallelogram
c) Square
d) Kite
View Answer

Answer: d
Explanation: Triangle has only three sides, it cannot form any diagonals. As diagonals are formed by figure which have four or more sides. Since it is not possible to draw a diagonal in a triangle ∴ the correct option would be 0.

Answer: c
Explanation: A kite is a quadrilateral which has its two adjacent sides equal and its diagonals are perpendicular to each other (i.e. Angle=90°).

8. Diameters of a circle can be considered as diagonals.
a) True
b) False
View Answer

Answer: b
Explanation: Diameters cannot be considered as diagonals because circle does not have any side, hence according to the definition the given statement is false.