1. A simple closed curve made up of only line segments is called a ________
a) polygon
b) square
c) rectangle
d) triangle
View Answer

Answer: a
Explanation: The options other than polygon are special cases of polygons. Polygon can have ‘n’ number of sides but all the sides should be joined by a straight line.

2. Which of the following is a polygon?
a)

Answer: d
Explanation: Incorrect options are not polygons because they have their side as curved lines. As we know that the polygon is a figure which consists of ‘n’ numbers of side but all of them should be straight lines and not curved.

3. Which of the following is not a polygon?
a)

Answer: d
Explanation: The definition of a polygon states that ‘A simple closed curve made up of only line segments is called a polygon.’ Here the basic condition for a polygon is that the figure should be a closed figure and there can be ‘n’ numbers for sides.

Answer: c
Explanation: A triangle is three sided polygon. The triangles are classified into three types (i) Equilateral Triangle (ii) Isosceles Triangle (iii) Scalene Triangle. This classification is done on the basis of length of each side and the angle between these sides.
(i) Equilateral Triangle: In this triangle all sides are of equal length and all the angles measure=60° 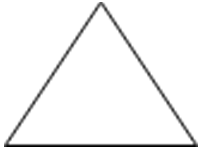 (ii) Isosceles Triangle: In this triangle, two sides are of equal length and the base angles are equal. 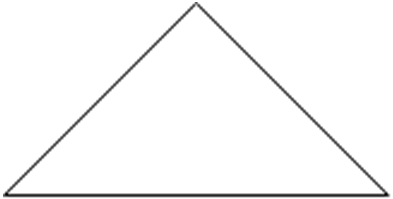 (iii) Scalene Triangle: In this triangle, all the sides are of different and all the angles are different in measure. 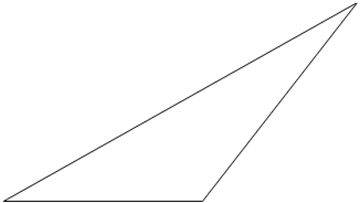 6. A polygon having ten sides is called decagon.
a) True
b) False
View Answer

Answer: a
Explanation: The word polygon is a Latin word (where ‘Poly’ means many ‘Gon’ means sides). This is derived by the number of sides possessed by the figure. Here we take an example of six sided figure in Latin six is hex therefore the name of the figure is ‘hexagon’. Similarly, ten sided figure is known as a decagon.