Answer: c
Explanation: The definition of a polygon states that ‘A simple closed curve made up of only line segments is called a polygon’. The other options which does not state the a polygon is a closed figure and made of straight lines are wrong.

2. Which of the following is a triangle?
a)

Answer: a
Explanation: There are four types of figures in the options, here we need to find which of the following is a triangle. The triangle is a polygon which have three sides which also form three angles with each other.

3. Which of the following can be classified as pentagon?
a) 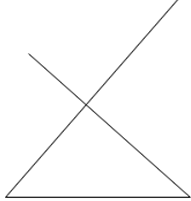 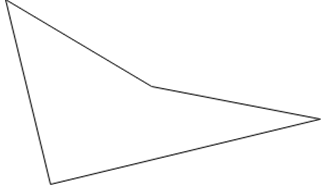 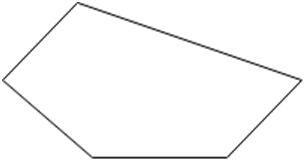 Answer: d
Explanation: A polygon which has five sides and five angles is called a pentagon. One can find this by a small trick, a student should learn to break the word. For example, Hexagon: Hexa+Gon . As we know that hexa is six, it would be easy for the students to learn the names of the polygons.

4. All parallelograms are square.
a) True
b) False
View Answer

Answer: b
Explanation: All the squares are special cases of parallelogram. This is because parallelogram is a four-sided polygon with opposite sides parallel to each other. Moreover, a square is four-sided closed figure with all angles measuring 90° and all sides equal. So, the given statement is false.

5. If a polygon has its opposite sides equal and parallel to each other and all angles measuring 90°, identify the polygon.
a) Parallelogram
b) Square
c) Rectangle
d) Rhombus
View Answer

Answer: b
Explanation: If a rhombus has it’s opposites sides equal and parallel then it can be square or a rhombus but the question also states that the angle between the sides is 90°. Square is a special type of rhombus which has all the angles as 90°.

6. When a square is pushed from one corner keeping the base as it is, which polygon is formed?
a) Square
b) Parallelogram
c) Rhombus
d) Rectangle
View Answer

Answer: c
Explanation: One can find this by a small trick, a student should learn to break the word. For example, Hexagon: Hexa+Gon. As we know that Hexa is six. Similarly, Seven is known as Hepta. ∴Heptagon.

9. A parallelogram each of whose angles measures 90° is ___________
a) square
b) rectangle
c) parallelogram
d) square as well as Rectangle
View Answer

Answer: b
Explanation: If a parallelogram has all it’s angle as 90° then it’s a special case of parallelogram and it can be either square or a rectangle.

11. What is the general form of naming a polygon?
a) Polygon
b) Hexagon
c) n-gon (where n represents number of sides in a polygon)
d) Pentagon
View Answer

Answer: c
Explanation: One can find this by a small trick, a student should learn to break the word. For example Hexagon: Hexa+Gon now as we know that hexa is six. Similarly, if a polygon has ‘n’ sides then the polygon would be named as n-gon.