This set of Machine Dynamics Questions & Answers for Exams focuses on “Synthesis of Four Bar Mechanism for Body Guidance”.

1. Which of the following mathematical tool is used to synthesize the mechanism graphically?
a) Tangent
b) Perpendicular bisector
c) Chord
d) Arc of contact
View Answer

Answer: b
Explanation: When the spatial position of the link or the mechanism is given, then the mathematical tool used to locate the position of joints is the perpendicular bisector.
advertisement

2. Graphical errors occur during the function generation solely due to choice of wrong scale.
a) True
b) False
View Answer

3. Which of the following given below is not a type of error which could be identified during function regeneration?
a) Structural
b) Mechanical
c) Graphical
d) Theoretical
View Answer

Answer: d
Explanation: When a function is being regenerated, then it is possible that we may encounter structural, Mechanical or simply graphical error but it is not possible to have a theoretical error.
advertisement
advertisement

4. Which of the following is not classified under synthesis problem?
a) Body guidance
b) Function generation
c) Path generation
d) Graphical methodology
View Answer

Answer: d
Explanation: Graphical methodology can result in errors in the synthesis of a mechanism hence, it is classified as a synthesis problem. However, the remaining options do not classify as synthesis problems.

Answer: a
Explanation: Order defect occurs when the precision points are not configured properly. It is to be noted that too many configuration points does not lead to order defect.
advertisement

7. If the given axes are Y and X axis and the numbers represent the spatial points, then what will be the position of one of the pivots?

Answer: a
Explanation: If the points are joined and then a perpendicular bisector of the line formed by the joined points is made to intersect, then the intersection point gives the position of the pivot. In the above figure, it lies below the X axis and in the IVth quadrant.
advertisement

8. Structural errors are 0 at precision points.
a) True
b) False
View Answer

Answer: a
Explanation: Grashof type 4 bar linkage has been oserved to have branch defect. Klein and ritterhau’s construction methods are used to calculate velocity and acceleration of the links in a mechanism.
advertisement

Answer: a
Explanation: Overlay method is used in the synthesis of function generation, and it is used to generate precision points in a 4 bar linkage.

To practice all exam questions on Machine Dynamics, here is complete set of 1000+ Multiple Choice Questions and Answers. 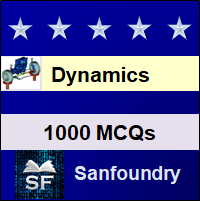