Answer: c
Explanation: 3-dimensional coordinate system with X, Y and Z axes considered up to infinity is termed as WCS. WCS is an abbreviation of World Coordinate System. Icon of WCS is shown at the lower left corner of drawing area.
advertisement

2. Which type of coordinate system is used in AutoCAD?
a) 2-Dimensional
b) 3-Dimensional
c) 1-Dimensional
d) User dependent
View Answer

Answer: d
Explanation: Origin of UCS can be anywhere in the WCS. It may or may not coincide with WCS. It can be moved/shifted anywhere in the drawing area.
Sanfoundry Certification Contest of the Month is Live. 100+ Subjects. Participate Now!
advertisement
advertisement

4. When working with User Coordinate System display of square of an icon can be put ON or OFF using ____________
a) UCSICON command
b) UCS command
c) Double click on axes
d) VIEW command
View Answer

Answer: a
Explanation: When working with User Coordinate System, square of an icon is not displayed. It can be put ON or OFF using UCSICON command. That command further prompts for options.

5. When you see a small square at the intersection of two axes of the coordinate system, you are working with UCS.
a) True
b) False
View Answer

Answer: b
Explanation: UCS icon is displayed using a line width of 1 pixel, by default. User can change these widths of line. A user can beef it to 2 or 3 pixel widths.

7. The position and orientation of the UCS origin is controlled by ________
a) UCS command
b) UCSICON command
c) VIEW command
d) MOVE command
View Answer

Answer: a
Explanation: Position and orientation of the origin are user coordinate system is controlled by UCS command. VIEW command is used to display the view dialogue box only. MOVE is the command used to move a drawing from one place to another.
advertisement 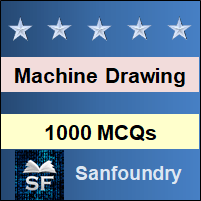