1. Which of the following property is affected by heat treatment?
a) Hardness
b) Strength
c) Ductility
d) All of the mentioned
View Answer

Answer: d
Explanation: Heat treatment involves changes in the micro structure and hence all the internal properties are effected.
advertisement

Answer: a
Explanation: In annealing, component is heated to a temperature above than critical temperature.

3. Which of the following is true?
a) Rate of cooling in normalising is faster then in annealing
b) Annealing improves ductility
c) Normalising improves grain structure
d) All of the mentioned
View Answer

4. Quenching
a) Consists of heating the component to critical temperature
b) Cooling rapidly
c) Increases hardness
d) All of the mentioned
View Answer

8. Flame hardening involves
a) Heating the surface above the trAnswerformation range
b) Quenching after heating
c) Minimum case depth is 1mm
d) All of the mentioned
View Answer

Answer: d
Explanation: Flame Hardening is a process of heating the surface with a flame above critical temperature and then quenching it.

Answer: c
Explanation: Heating can only be done in presence of alternating current and not constant current.
advertisement

10. Case carburising involves
a) Introducing carbon at surface layer
b) Heating range 880 to 980’C
c) Case depths up to 2mm are possible
d) All of the mentioned
View Answer

11. Which of the following are not true for carbo nitriding?
a) Introducing carbon and nitrogen at surface layer
b) Component is heated in range of 650 to 920’C
c) Cyaniding is similar to carbo nitriding except that the medium is liquid
d) This process gives a lower wear resistance compared to case carburising process
View Answer

12. Which of the following are true for nitriding?
a) Nascent oxygen is involved
b) Temperature range 490 to 590’C
c) Gaseous or liquid medium
d) All of the mentioned
View Answer

Answer: d
Explanation: In nitriding nascent oxygen is acted on the surface of the product at a temperature of 490::590’C in a gaseous or liquid medium. 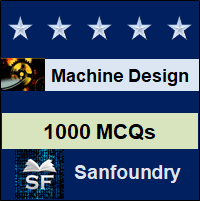