Answer: c
Explanation: The process of cathode sputtering is performed at a low pressure (about 10-12 torr). So, when the high energy particle landing on the substrate actually results in a very uniform film and adhesion.
advertisement

Answer: d
Explanation: Electroplating is a process of coating an object with one or more layers of different metal. When dc is passed through the electrolytic solution, the positive metal ions migrate from anode (metal) and deposit on the cathode (substrate).
advertisement

8. Which of the following process is involve in thick film technology
a) Screen printing
b) Ceramic firing
c) Silk screening
d) All of the mentioned
View Answer

Answer: c
Explanation: Silk screening is one of the processes of thin film technology.

Answer: d
Explanation: The process of screen printing pattern is an ancient one. The Egyptian used this technique thousands of years ago to decrease potter and wall of building.
advertisement

10. What is the advantage of using Surface Mount Technology?
a) All of the mentioned
b) Low power consumption
c) Reduces heat dissipation in components
d) Use leaded or leadless components
View Answer

Answer: d
Explanation: Surface Mount Technology utilizes micro-miniature leaded or leadless components called Surface Mount Device (SMD) which are directly soldered to the specified areas on the surface without hole. Also, the compact size of SMDs reduces the area in PCB and increases the packing density.

To practice all areas of Linear Integrated Circuits, here is complete set of 1000+ Multiple Choice Questions and Answers. 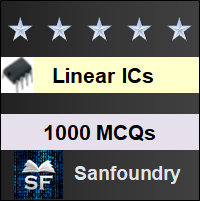