This set of Java Quiz focuses on “Multithreading”.

1. What requires less resources?
a) Thread
b) Process
c) Thread and Process
d) Neither Thread nor Process
View Answer

2. What does not prevent JVM from terminating?
a) Process
b) Daemon Thread
c) User Thread
d) JVM Thread
View Answer

Answer: d
Explanation: Thread scheduler decides the priority of the thread execution. This cannot guarantee that higher priority thread will be executed first, it depends on thread scheduler implementation that is OS dependent.
Sanfoundry Certification Contest of the Month is Live. 100+ Subjects. Participate Now!
advertisement
advertisement

Answer: b
Explanation: Time slicing is the process to divide the available CPU time to available runnable thread.

5. Deadlock is a situation when thread is waiting for other thread to release acquired object.
a) True
b) False
View Answer

Answer: a
Explanation: Deadlock is java programming situation where one thread waits for an object lock that is acquired by other thread and vice-versa.
Check this: Information Technology MCQs | Programming Books

6. What should not be done to avoid deadlock?
a) Avoid using multiple threads
b) Avoid hold several locks at once
c) Execute foreign code while holding a lock
d) Use interruptible locks
View Answer

Answer: c
Explanation: To avoid deadlock situation in Java programming do not execute foreign code while holding a lock.

Answer: b
Explanation: notify() wakes up a single thread which is waiting for this object.
advertisement

10. Which of the following will ensure the thread will be in running state?
a) yield()
b) notify()
c) wait()
d) Thread.killThread()
View Answer

Answer: c
Explanation: wait() always causes the current thread to go into the object’s wait pool. Hence, using this in a thread will keep it in running state.

To practice all areas of Java for Quizzes, here is complete set on 1000+ Multiple Choice Questions and Answers on Java. 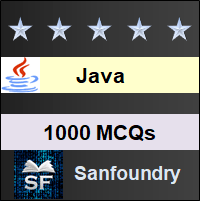